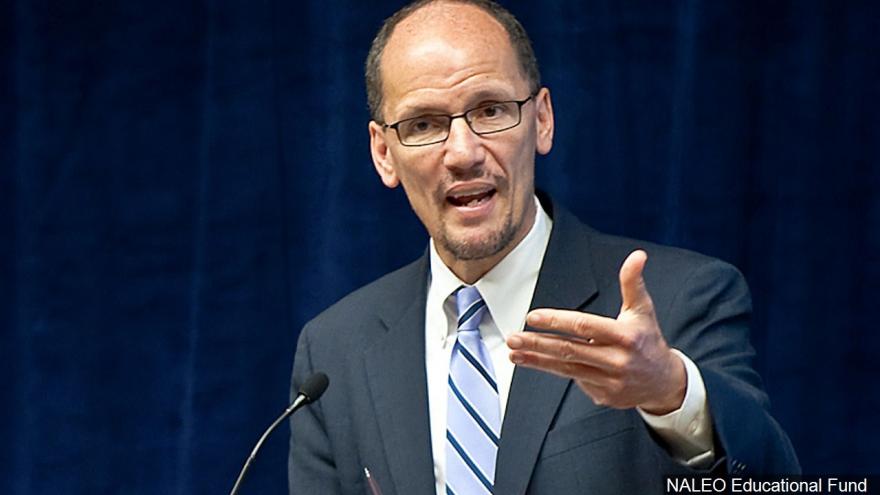 (CNN) -- Democratic National Committee Chair Tom Perez on Sunday defended a new lawsuit alleging a wide-reaching conspiracy by the Trump campaign, Russia, WikiLeaks founder Julian Assange and others to interfere in the 2016 election to the detriment of the Democratic Party.

Asked why the Democrats didn't wait for special counsel Robert Mueller's Justice Department probe into election interference to end, Perez said on NBC's "Meet the Press" that the DNC needed to file "in a timely manner under the statute of limitations."

"I don't know when Director Mueller's investigation is going to end, nor would I ever ask him because I want him to do a good, thorough job," Perez continued, adding that he's confident the lawsuit will get a jury trial.

The lawsuit and other "sideshows," such as the publication of former FBI Director James Comey's explosive new book that portrays President Donald Trump in a negative light, "seem spectacularly ill-timed and [email protected] strategy of portraying a sober and essential probe as a partisan vendetta. Everyone should chill out and let Mueller do his job," Axelrod tweeted Friday.

On Friday and Saturday, Trump mocked Democrats for their lawsuit, suggesting Republicans could use it to their advantage and dredging up allegations against the committee's former chair, Debbie Wasserman Schultz.

"Just heard the campaign was sued by the obstructionist Democrats. This can be good news in that we will now counter for the DNC Server that they refused to give the FBI, the Debbie Wasserman Schultz Servers and documents held by the Pakistani mystery man and Clinton emails," Trump tweeted Friday.

Perez told ABC News' "This Week" on Sunday that if those named in the suit want "to relitigate all their wild theories," they'll get sanctioned.

"(T)here's this thing called Rule 11, where you get sanctioned for trying to do things like that," he said. "That's why we have a civil justice system. You can't fire this judge who will preside over the case. You can't pardon defendants in a civil case. I think it's so important for the American people to see the truth here."

Despite the DNC's continued fundraising woes, Perez told "Meet the Press" that the party "can't afford not to" pursue the lawsuit.

"It's hard to put a price tag on preserving democracy," he continued, also acknowledging that he doesn't know how much money the lawsuit will cost the organization.