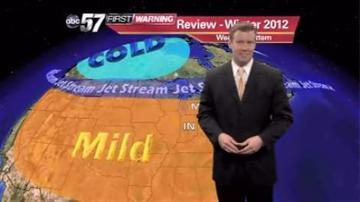 In our weather review of 2012 we start out looking back at a winter that will be remembered for how drastically different it was than the year before.

Winter 2012 was incredibly mild. In fact, there were only 13 days of the entire season with highs below freezing.

The weather pattern was rather unusual. There were very few cold blasts and none with true arctic air.

Summing up snowfall over the months December was way below average with only 5.7 inches.

Then February was another almost snow-less month.

While it didn't come as snow, 2012 started with decent rain amounts in a year that will be known for the drought.

But the biggest story will be temperatures. While no month was exceptionally warm as far as records, the entire season will be known for being the fourth-warmest on record.