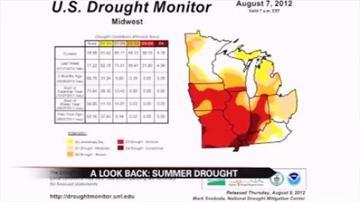 A chill is in the air and that has many folks longing for warmer weather. But the dog days of summer had triple digit highs and a drought that will not be forgotten.

After the ninth driest spring on record, Michiana started the summer with scorching heat and little rain.

This caused a massive drought impacting everything from crop yields to 4th of July celebrations.

The skies over many Michiana neighborhoods were dark on Independence Day after several counties banned fireworks.

"We're all in favor of celebrating the 4th of July. I'm a big fireworks fan myself, but it's time to use some common sense. Hopefully when the drought breaks we'll allow fireworks to be used and we'll celebrate maybe in August,” said Frank Lucchese, Elkhart County Commissioner.

Unfortunately, by August, nearly 70-percent of the state was dealing with extreme drought, the worst seen in years.

Feeling the worst of it were farmers.

"Even with the droughts in 1988 and other years we had, we always had something to harvest. But this year, there are going to be fields with zero,” said farmer Ed Leininger.

Rain finally arrived well into the season, too little too late for corn,

But soybeans thrived thanks to a later and longer reproduction period.

"We were getting really close to hitting a wall where it wasn't going to do any good anymore for the beans,” said farmer Allen Marker.

As the leaves began to change, Michiana saw some relief.

But the driest November on record in South Bend ensured that 2012 will forever be remembered by its lack of precipitation.