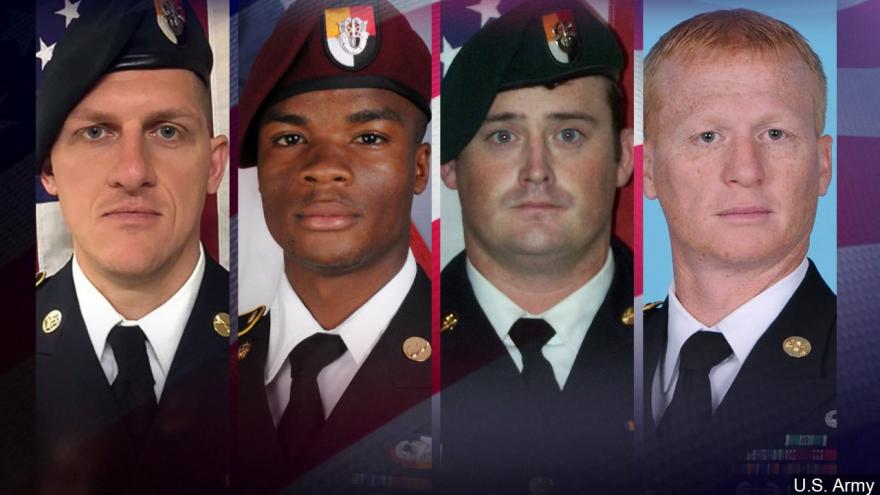 (CNN) -- The US troops attacked in Niger were on their way back to their operating base when they were ambushed by 50 ISIS fighters, according to Joint Chiefs Chairman Gen. Joseph Dunford, who provided a timeline of the attack on Monday.

Four US and five Nigerien soldiers were killed and two Americans were wounded in the attack that occurred on October 4, but details of what happened remain murky more than two weeks after the incident as investigators work to determine precisely what happened, a US official has told CNN.

During the Pentagon briefing Monday, Dunford clarified that the US troops requested additional support about an hour after the firefight began.

Remotely piloted aircraft arrived overhead within minutes of the request for help. French Mirage jets arrived on the scene approximately one hour later -- two hours after the troops made initial contact with enemy forces.

"It's important to note when they didn't ask for support for that first hour, my judgment would be that that unit thought they could handle the situation without additional support," Dunford said. "And so well we'll find out in the investigation exactly why it took an hour for them to call."

Dunford said there is no indication that the US troops were operating outside their orders at the time of the ambush.

"I don't have any indication right now to believe or to know that they did anything other than operate within the orders that they were given," Dunford said. "That's what the investigation's all about. So I think anyone that speculates about what special operations forces did or didn't do is doing exactly that, they're speculating."

Still, Dunford said the military will be investigating if the planned reconnaissance mission changed.

"It was planned as a reconnaissance mission. What happened after they began to execute, in other words, did the mission change? That is one of the questions that's being asked. It's a fair question but I can't tell you definitively the answer to that question. But, yes, we've seen the reports, we've seen the speculation," he said.

One US soldier, Sgt. La David Johnson, was separated from his 12-member team as it was ambushed by 50 ISIS fighters, and his body was recovered 48 hours later nearly a mile away from the central scene of the ambush in Niger, four administration officials familiar with the early assessment of what happened had told CNN on Friday.

Dunford said Monday that he could not definitely confirm reports that Johnson was found nearly a mile away but that those details would come to light as part of the investigation.

"I think we owe the families and American people transparency," Dunford said.

That commitment to providing more information to the families of fallen soldiers -- and the American people -- comes as lawmakers continue to raise questions over exactly what transpired in Niger and the extent of US military involvement in Africa.

Senate Armed Services Chairman John McCain has criticized the Pentagon and Trump administration for not being forthcoming about the attack -- threatening a subpoena last week -- and Defense Secretary James Mattis went to Capitol Hill on Friday to meet with both McCain and South Carolina Republican Sen. Lindsey Graham.

"One of the fights I'm having with the administration is the armed services committee is not getting enough information," McCain said Monday on ABC's "The View." "We deserve it."

In the aftermath of the ambush, several key lawmakers have said they didn't know the US had troops in Niger.

But the Pentagon and White House have previously notified Congress about the US mission in Niger several times this year.

The Pentagon is still looking at the exact circumstances of how and when Johnson became separated, but is emphasizing that the search for Johnson began immediately and dozens of US forces were quickly moved to Niger's capital Niamey to be ready to go into the field, which some did.

Experts working for US Africa Command are trying to establish an hour-by-hour timeline of what happened as part of a comprehensive investigation that includes all the military branches and elements of US intelligence agencies that were involved in the mission.

CNN previously reported that the French Mirage jets that arrived overhead within 30 minutes of the firefight to fly low passes in an attempt to disperse the attackers did not have permission to drop bombs.

But on Friday, US officials said that French jets did have authority to bomb but did not because pilots could not readily identify enemy forces in this firefight and did not want to risk hitting US and Nigerien troops.

Monday's Pentagon briefing with Dunford offers a particularly striking change of tone from the public response of the Trump administration in the wake of the Niger attack.

President Donald Trump's response to the attack has drawn some criticism, particularly his public feud with a Democratic congresswoman over a condolence call he made to Johnson's widow.

On Monday, Trump tweeted shortly after Myeshia Johnson, the widow of Sgt. La David Johnson, discussed her disappointment with the call on "Good Morning America" Monday morning, saying the President stumbled on her husband's name and suggesting the only reason he knew it was because the report was right in front of him.

"I had a very respectful conversation with the widow of Sgt. La David Johnson, and spoke his name from beginning, without hesitation!" Trump tweeted.

Johnson said she was distraught over Trump's alleged oversights during the call, which came as the Johnson family and Rep. Frederica Wilson, D-Florida, who is a friend of the family, rode in a limo to receive Johnson's body from Dover Air Force Base.

"(The call) made me cry because I was very angry at the tone of his voice," she said.

A White House official described Monday's briefing as an intentional effort to move beyond the heated rhetoric from all sides on this -- including from the West Wing.

An official said White House chief of staff John Kelly and people throughout the West Wing would be watching the briefing.

Kelly became embroiled in the controversy after taking to the White House podium last week to say that he was "stunned" by Wilson's decision to take to the press to criticize Trump for his call with a Gold Star widow, though he did not dispute Wilson's claim that Trump told the widow of Sgt. La David Johnson that he "knew what he signed up for."

Kelly also claimed that Wilson took credit for securing "$20 million" in federal funding to build a new FBI field office in Miami in 2015, a claim that was proven erroneous by a video of the dedication ceremony posted Friday by the Sun Sentinel.

Accusing her of being an "empty barrel," Kelly said Wilson focused more on her own actions than the heroism of the two FBI agents for whom the new building had been named.

Kelly and Dunford maintain a close personal relationship and Kelly described Dunford as his best friend during the White House briefing last week.