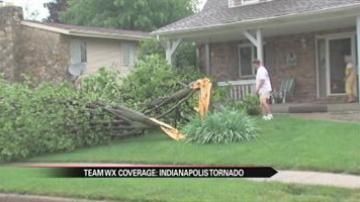 The tornado that the National Weather Service estimates was an EF-1, damaged over a dozen homes and at least one business in and around Indianapolis.

“Most of the homes affected a light damage. We had a couple homes that had severe damage, and we did not have any homes that were destroyed,” said Hendricks County Emergency Manager David Warren.

The National Weather Service said the storm was abnormal, and they weren’t expecting a tornado, but said they were quick to issue a warning to residents.

“We were not anticipating storms of this nature that would produce a tornado today. But we are always on the ready for that in case it happens. And the storm showed evidence of rotation and that’s why we issued tornado warnings on it,” said David Tucek with the National Weather Service.

The Emergency Manager of Hendricks County said the Red Cross visited the area Tuesday, and most residents affected are expected to be okay.