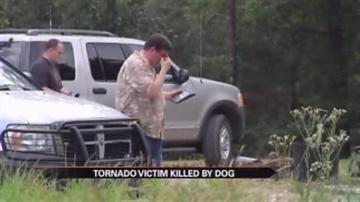 JESSIEVILLE, Ark. -- A family that lost their home to the tornado that hit Moore, Oklahoma is dealing with another tragedy.

Their five-year-old son, who survived the tornado, was killed by a dog while staying at a friend's house in Arkansas.

Police say the boy was attacked by a bull mastiff estimated to be between 150 and 170 pounds.

"The child was putting on some shoes and was crying and upset, and the dog possibly took that as being aggressive and, at that time, the child was attacked," said Harland County Sheriff Scott Hinojosa.

The dog's owner tried pulling the dog off the boy but by the time she did, he already had serious cuts to his neck and head.

He was taken to the hospital where he later died.