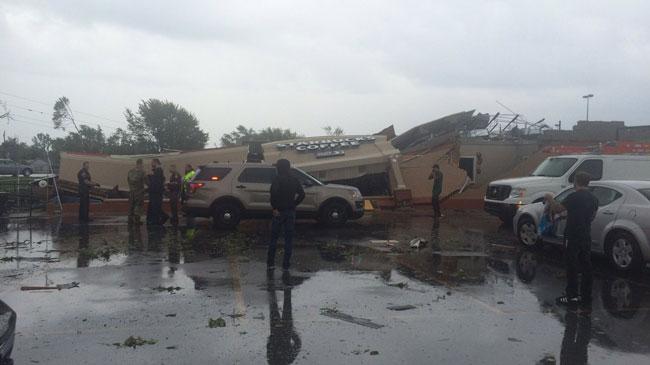 (CNN) -- Three tornadoes touched down Wednesday afternoon in Indiana, one causing damage in Kokomo, according to the National Weather Service.

A Kokomo fire dispatcher said there were reports of minor injuries, property damage and downed trees. Power was out across much of the town. Crews were checking on neighborhoods with damage.

Photos and video posted online showed a Starbucks location flattened by the storm.

Firefighters say no reported injuries in this Starbucks in Kokomo. pic.twitter.com/B3I6OSfg2Y

Tornado damage at Starbucks Kokomo. No word of injuries yet pic.twitter.com/oddK2lF1A9

Omg. Never been so scared in my life. #kokomo pic.twitter.com/uu5R0fRQnz

One tornado was reported west of Crawfordville, said meteorologist Dave Tucek. Another was east of Indianapolis.

Republican vice presidential candidate and Indiana Gov. Mike Pence tweeted that he was leaving the campaign trail and returning home. "We are leaving NC and getting back to Indiana. Serious storms and tornadoes. Please keep Hoosiers in your prayers," he said.