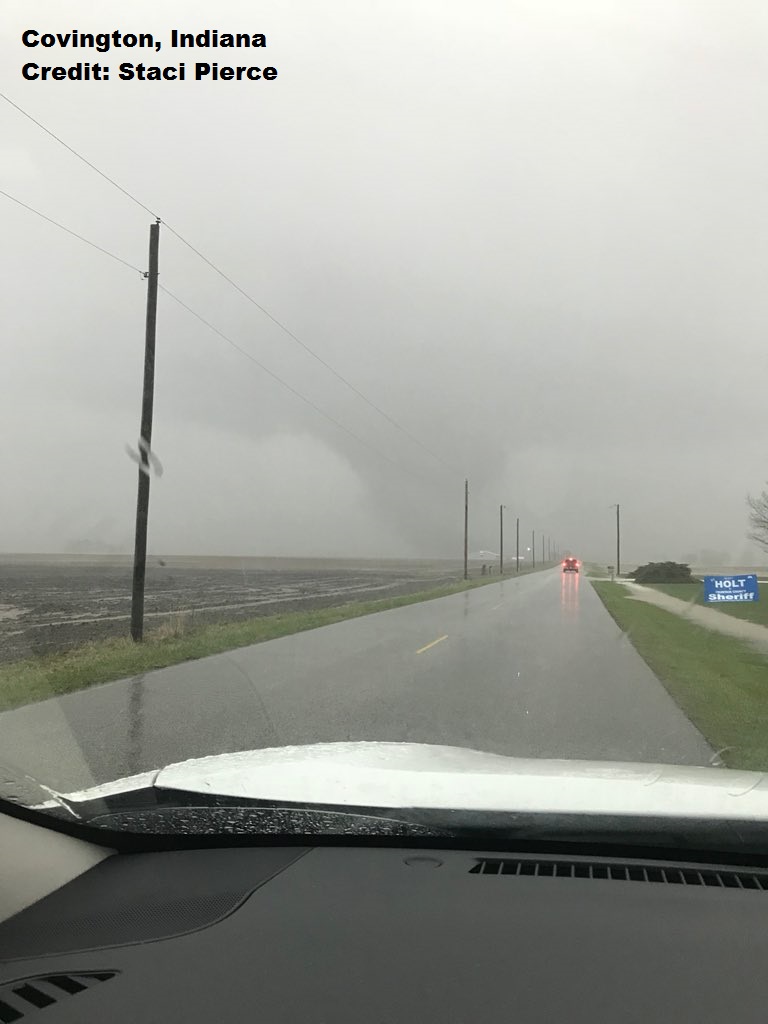 Tornado near Covington, Indiana, and I-74 Staci Pierce
Despite the colder-than-average temperatures that dominated the Midwest, Ohio Valley and Great Lakes in March and first couple days of April, spring-like thunderstorms moved through on Tuesday. Strong to severe thunderstorms affected states from Michigan and Indiana to Texas, Louisiana and Alabama. Storms actually spanned about 1,000 miles from Detroit to New Orleans as a potent cold front pushed from west to east Tuesday evening. The worst of the storms moved through parts of Ohio, Indiana, Kentucky, Illinois, and Arkansas. Each of those states saw at least one confirmed tornado.

The large tornado above was spawned by a supercell that moved from the Indiana-Illinois state line to Lafayette and eventually Fulton County. The National Weather Service immediately made the decision to send a storm survey crew to Fountain and Tippecanoe Counties to check out potential damage. The cities of Lafayette and West Lafayette were under a Tornado Warning due to the storm, and students at Purdue University were forced to take shelter. 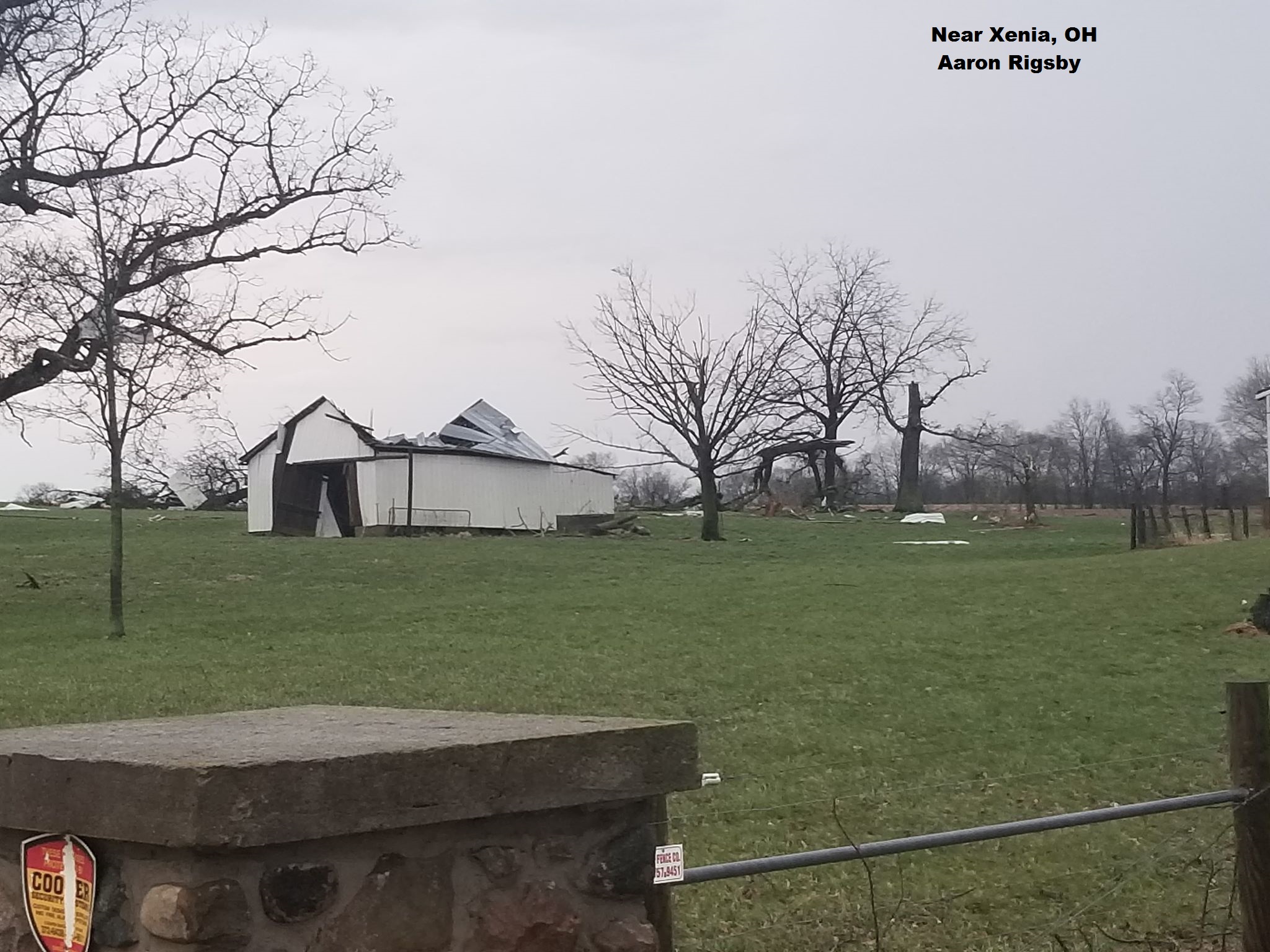 Tornado damage near Clifton and Xenia, Ohio Aaron Rigsby
Additional tornadoes moved through West Central Ohio, producing significant damage along the way. The National Weather Service has confirmed a tornado touched down and caused the damage you see in these photos. 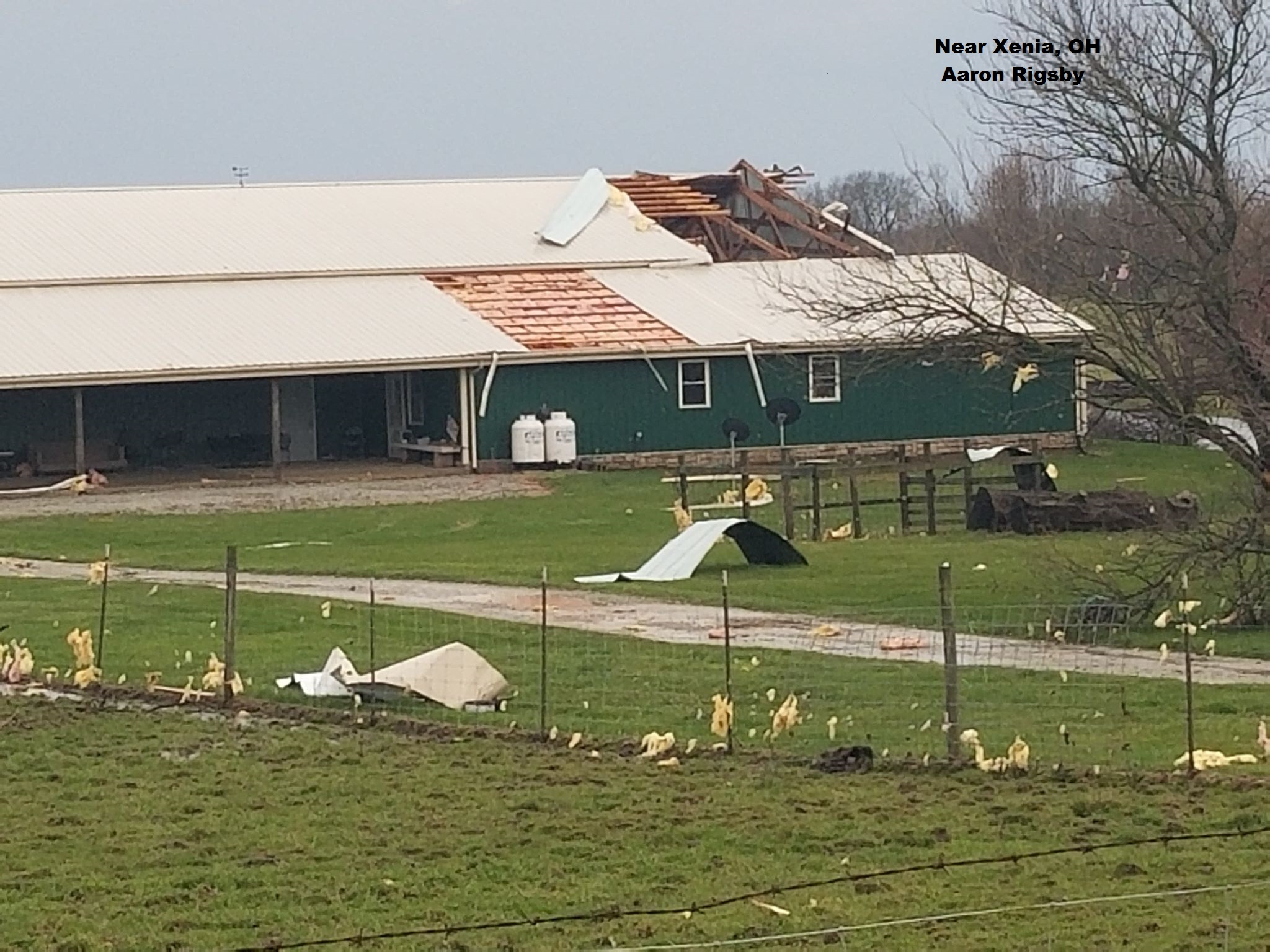 Tornado damage near Clifton and Xenia, Ohio Aaron Rigsby
That same supercell spawned a second tornado in Grove City, Ohio, which is a suburb of Columbus. Both twisters have been rated EF1 with winds up to 110 MPH. Other tornadoes occurred in Illinois, Missouri and Arkansas. In total, there were about 10 reported tornadoes as a result of the powerful storm system. 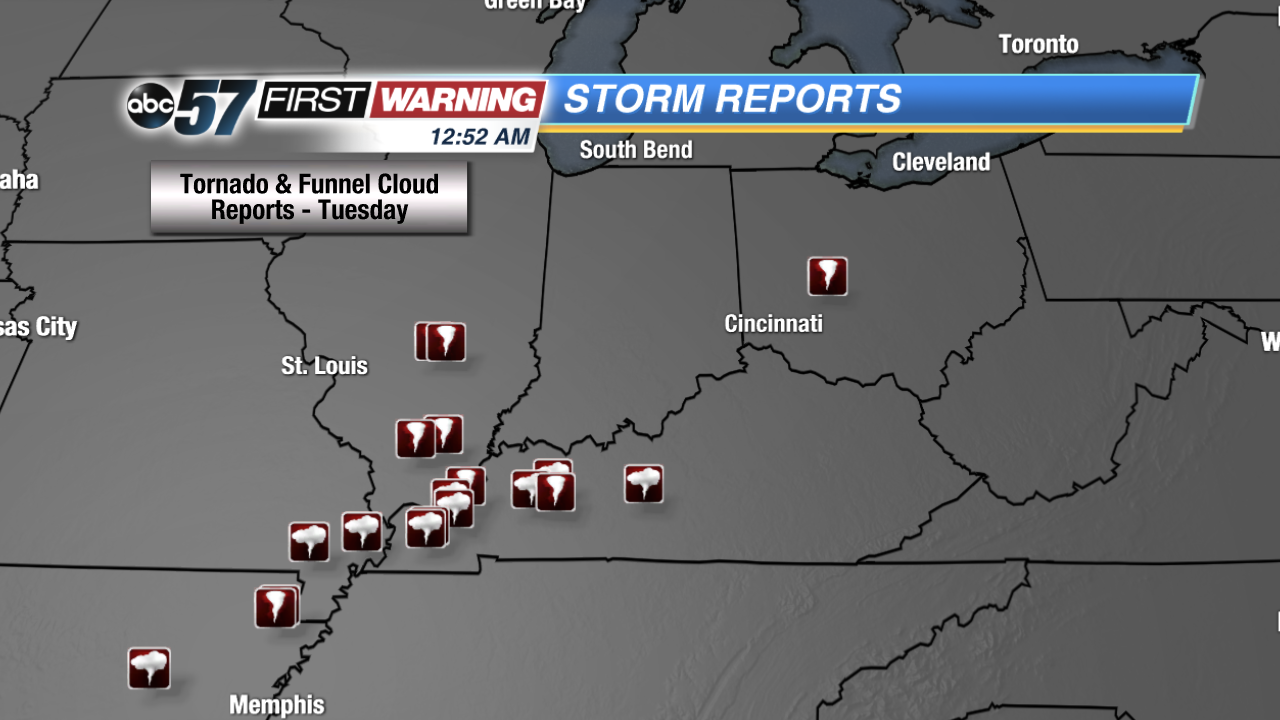 Tornado and funnel cloud reports (some missing reports) NOAA SPC
Some of the storms that moved through Illinois, Missouri and Kentucky produced multiple funnel clouds and tornadoes. You may notice a lack of tornado icons in Indiana and Ohio on the map above; as storm surveys get completed, that will likely change with the tornado reports from Covington and Lafayette, Indiana, and Grove City, Ohio. 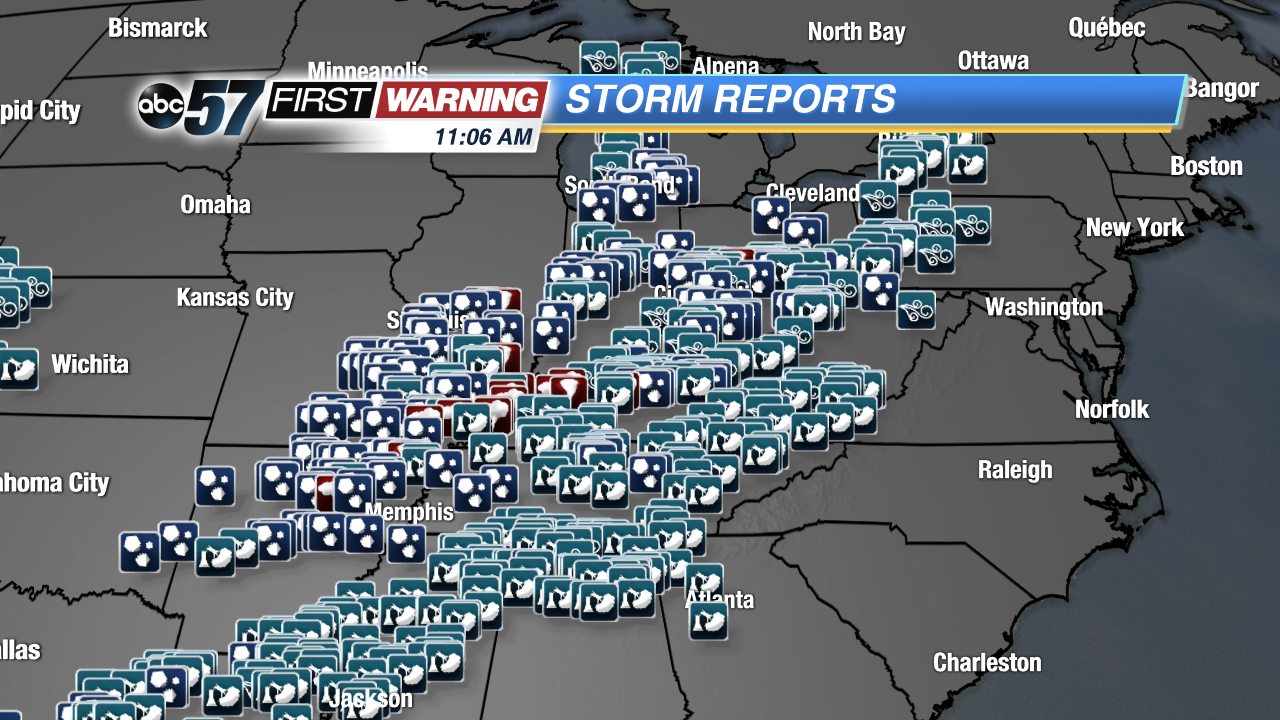 Damaging winds, wind damage, tornado, and hail reports from Tuesday NOAA SPC
It wasn't just tornadoes wreaking havoc, though. There were numerous reports of large hail and damaging wind gusts over 60 MPH. As of 2 PM Wednesday, there were a total of 335 high wind reports and 120 hail reports to go along with the tornado reports. Overall, it was one of the bigger severe weather days of 2018 thus far. However, none of the reports mentioned above deal with flooding. There were numerous flood warnings and flash flood warnings issued across Illinois, Indiana and Ohio as heavy rain plagued those states. High water was reported in multiple locations, and many roads were closed by emergency personnel due to flooding. 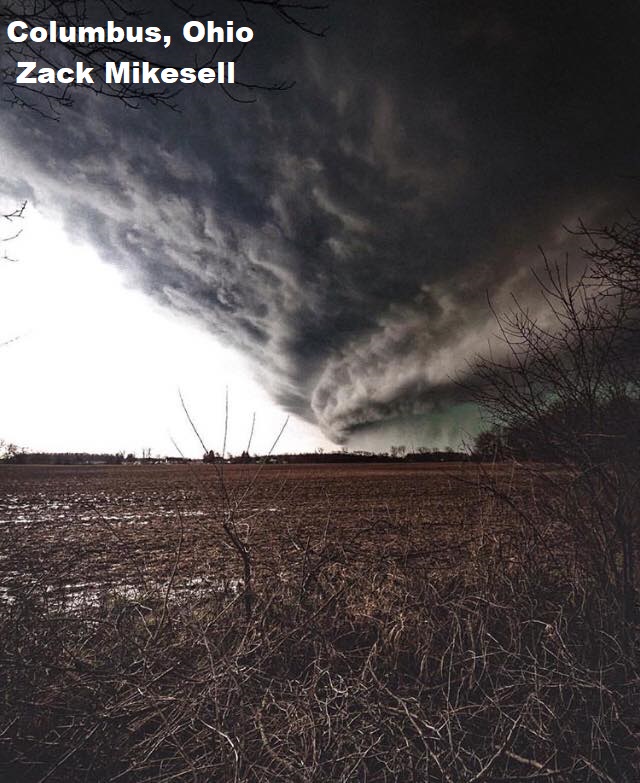 Supercell moving through Columbus, Ohio Zack Mikesell
The storms are being blamed for at least five injuries due to damaging winds and wind damage. There are no reports of any fatalities as a result of the system. Stick with ABC 57 News as more information will continue to filter in from storm surveys in Illinois, Indiana and Ohio over the coming days.
Share this article: