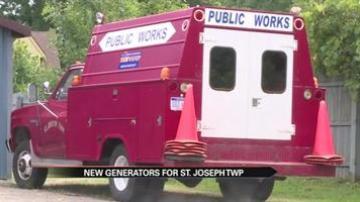 ST. JOSEPH TOWNSHIP, Mich. -- Officials in St. Joseph Township say the storm that went through in early July caused more damage than any other storm since the 1980s. The town is spending thousands of dollars on generators to make sure they are fully prepared for severe weather in the future.

After the storm, township officials realized things like the sewer lift stations need generators to make sure they run even when the power is out.

"I think this storm caught everybody off guard-the magnitude of the storm," said Tim Fenderbosch, St. Joseph Township Manager.

Downed trees and power lines left the township dark for nearly a week.

When the power went out, all 16 sewage pumps lost power too.

"When you have a pumping station like that that losing power, you're not moving the sewage. It's going to back up," said Dick Beebe, St Joseph Township Public Works Supervisor.

"In the past, the storms haven't affected the whole township and this one did," said Fenderbosch.

Beebe and two of his public works employees worked 24 hours a day for 7 days straight to make sure waste didn't flood people's basements.

They ran two portable generators back and forth between 16 pumping stations.

The township will buy and hook up 16 generators by the time the project is complete in 2017. The project is expected to cost $200,000.