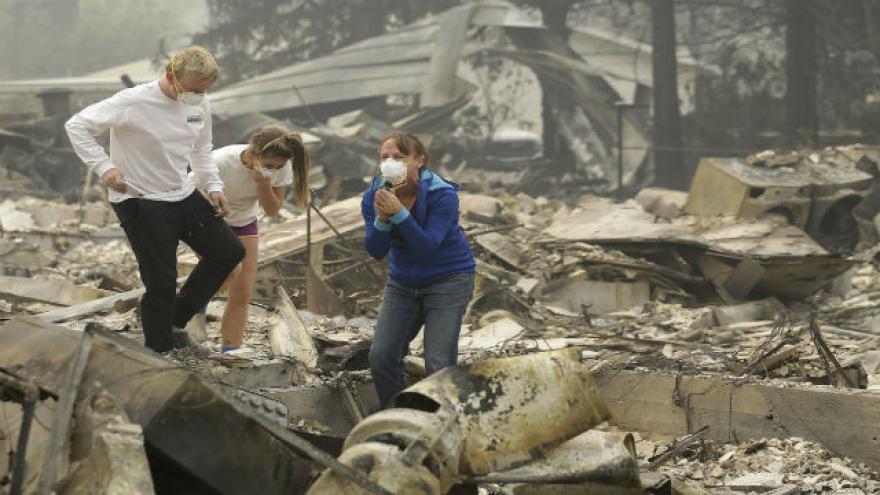 Mary Caughey, in blue, reacts after finding her wedding ring in debris at her destroyed home in Kenwood, California, on October 10. Photo courtesy Jeff Chiu/AP 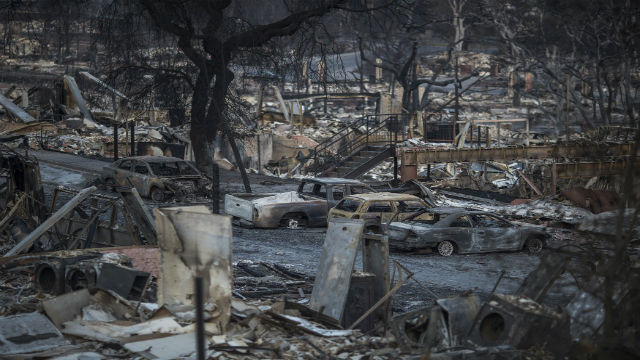 The ruins of houses destroyed by the Tubbs Fire are seen on October 14 in Santa Rosa. David McNew/Getty Images

"All your life savings and work for all the years is gone," Penny Wright told CNN. "We lived here 10 years. I never thought that Santa Rosa would have a fire like this and we would lose everything."

This is the aftermath of the October wildfires that burned more than 245,000 acres, destroyed an estimated 8,900 structures and killed 42 people, according to Cal Fire. The focus is now on cleanup of the resulting ash and debris -- both of which could pose risks to people and the environment.

Electronic waste such as computers and monitors also is hazardous, she said.

Ash is another concern, as it "can contain elevated and potentially harmful levels of heavy metals," said Lance Klug, a spokesman for the California Department of Resources Recycling and Recovery (CalRecycle).

Wind and rain are two concerns when it comes to these toxins and the risks they pose to the environment, said Geoffrey Plumlee, associate director for environmental health at the US Geological Survey.

He said if big rainstorms occur before the cleanup, then there's the potential for the toxins to flow into storm drain systems and end up in local rivers.

Additionally, Plumlee said the dust material can easily get caught in the wind, something that is commonly seen after fires. This is a potential exposure pathway for toxins to reach people and organisms, he said.

To make sure dust doesn't become airborne, Klug said crews water the ash and debris, as well as put tarps on trucks carrying the materials. The air in the region is monitored to measure the effectiveness of dust control, he added.

Local officials in Santa Rosa and other northern California areas hit by the wildfires have been warning residents about the dangers and health risks of returning to their fire-damaged properties.

"It is important to understand the risk to your safety and health even after the fire is out," Sonoma County, which includes Santa Rosa, advised residents.

It urged people to "refrain from cleaning ash and fire debris until professional hazardous material cleanup services are secured," and to use an air-purifying respirator mask if exposed to dust or ash.

Nearby Napa County even declared a local health emergency due to hazardous waste and materials after the fire.

When it comes to disasters such as wildfires, every cleanup operation is different, and the magnitude of this effort will be much larger than previous ones, Klug said.

"Every debris removal operation is unique and comes with its own set of challenges, including type of damage, terrain and accessibility," he said. "In addition to those factors, this cleanup effort is unique given the severe magnitude of the disaster and extent of the damage."

The first step in a wildfire cleanup operation, Klug said, is to evaluate and remove hazardous waste debris.

"The survey allows us to see the scope and magnitude of the work and identify areas where we can stage the work in a safe manner." Dutton said. "The hazardous waste must be properly disposed of at a waste facility to prevent further exposure to the public and the environment."

After the hazardous waste is removed, agencies and crews obtain right-of-entry permissions from property owners to evaluate and remove ash, debris and contaminated soil, Klug said.

In past cleanups, he said, this phase involved documenting each site, evaluating soil samples, removing metals and concrete to be thoroughly cleaned and recycled, and disposing of ash and contaminated soil at landfills permitted to accept that type of material. These facilities must have containment and monitoring systems to safely contain the waste and monitor for leaks, he added.

"Under the management of state and federal teams, contracted crews trained in hazardous waste operations and emergency response utilize measures to safely load, transport and dispose of the ash and debris," Klug said. "These methods, which include dust control and monitoring, are designed to minimize the potential impacts to the workers and the community.

Once the ash and contaminated soil was removed, Klug said the soil was graded, or scraped, to remove additional contaminated soil and smooth the surface. Then, after more soil sampling and analysis, crews worked on erosion control to minimize the sediment runoff and promote the growth of vegetation.

Once these steps were complete, property owners with certificates verifying their lots were clean were eligible to receive building permits from their counties, Klug said.

"The scale of these wildfires over a large geographic area of California will require a coordinated cleanup effort with assistance from federal agencies, state agencies, local agencies, tribal governments and contractors," Klug said.

Earlier this month, Gov. Jerry Brown declared a state of emergency for the counties of Napa, Sonoma, Yuba, Lake, Mendocino, Nevada, Orange and Solano. The proclamations allow all state government agencies to use state personnel, equipment and facilities for response and recovery efforts.

Brown issued an executive order to "to cut red tape and help streamline recovery efforts in communities impacted by the devastating wildfires," according to a news release from his office.

Additionally, President Donald Trump approved Brown's request for a presidential major disaster declaration. This allowed for federal disaster assistance to be made available to support state and local efforts, according to the governor's website.

Eric Lamoureux, a regional administrator with the California Governor's Office of Emergency Services, said at a news conference Monday the removal of household hazardous waste would begin this week. Once that phase is completed, he said, the cleanup of the remaining ash and debris will begin.

"Our goal that we're pushing hard on in terms of mobilizing crews is to have that work completed by early 2018, so come springtime you can begin the process of rebuilding and recovering," Lamoureux said.

While 85% of wine production in the United States comes from California, wine connoisseurs needn't worry.

Fewer than 10 vineyards in Mendocino, Napa and Sonoma counties were destroyed by the wildfires, according to the Wine Institute, a public policy advocacy organization that represents more than 1,000 California wineries and affiliated businesses.

The institute said those three counties, the regions most impacted by the wildfires, account for only 12% of the state's overall wine grape production combined. Additionally, 90% of grapes in Napa and Sonoma counties were harvested before the wildfires broke out, as well as 75% in Mendocino County.

"The industry expects to quickly recover from the fires and does not anticipate any problems with the future quality of the grapes," Gladys Horiuchi, a spokeswoman for the Wine Institute, told CNN.

While the outlook for the industry is hopeful, the picture is not so rosy for the wineries that must now rebuild.

Kathryn Reynolds, sales director at the Roy Estate vineyard in Napa Valley, told CNNMoney that while the vineyard appeared to be unharmed, almost all of the surrounding structures were destroyed.

"The main house where we did the tastings is completely demolished," she said. "The guest cottage is in ruins. The only thing standing (is) the brick chimney from the house."

The barn looks like it's melted in half, she added.

Though some vineyards and wineries lost everything, Horiuchi said vineyards can play an important role in helping to contain wildfires.

"Vineyards make effective firebreaks because they are irrigated and have high moisture content, helping to save structures near or surrounded by vineyards."