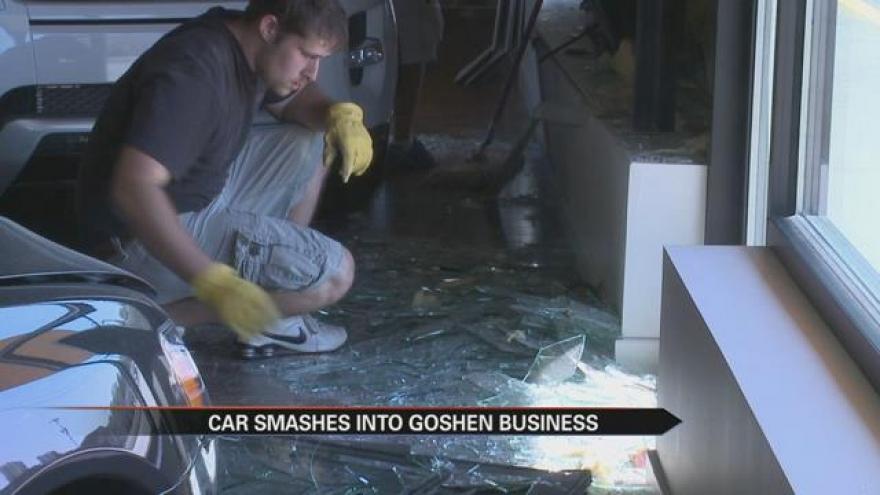 An Elkhart County car dealership is cleaning up after a car crashed into two showrooms.

Goshen Police have completed their investigation of the car crash that happened around 7:30 p.m. on Friday at Toy Barn, a luxury car dealership.

There is no word of an arrest and the case is now in the hands of the Elkhart County Prosecutors Office.

In the meantime Toy Barn will have to sell a few cars to cover the cost of repairs.

“When the car hit the show room it exploded the glass out pretty far back into the building to where you’d see pieces of glass almost to the back of the building,” says Ryan Maguire, General Manager of Toy Barn.

Maguire was recently hired at Toy Barn and Friday was his first day.

Surveillance video from Toy Barn and handed over to police.

Maguire says it shows a male driver walk away from the crash and get into another vehicle.

“We couldn’t believe anybody walked away from this,” exclaims Maguire.

Maguire says structural repairs and clean up will cost around $250,000.

“But we actually lucked out big time the store was closed so there was nobody inside the store to get hurt,” says Maguire.

Only a few cars suffered some scratches and dents. For the most part business is back to normal.

A local restoration company is helping Toy Barn pick up the pieces cleaning up those two showrooms.

“To be new in town and come into a situation like this and see that kind of support which was super positive it’s very exciting,” says Maguire.

Maguire says repairs to the dealership could take up to a month.