Trading blows instead of bullets 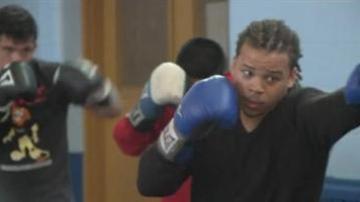 SOUTH BEND, Ind.- The South Bend Police Department together with a local church holds a boxing club for youth. It's an outlet for them to avoid the violence in the streets and learn some valuable lessons along the way.

Police say this boxing club is not only a way for teens to put down the guns and pick up some boxing gloves, it's also a way for community leaders to teach them more than boxing.

Kids of all ages come to the Grace Community Baptist Church on Harrison street Street twice a week. They strap on the gloves, put on the headgear, and learn how to fend for themselves with South Bend's finest.

But it's not just boxing taught in the ring.

"I think it gives an alternative for our kids in South Bend," said Darryl Boykins, Captain of the South Bend police Police Department.

With 30 shootings, including the death of a 2-year-old and a teenager not much older than these kids, in the past two weeks, Boykins said this is a good place for kids to channel their aggression.

"It gives them a healthy and safe place to go. Where there’s not a lot of violence around,” said Boykins.

The boxing club runs mostly off of volunteers and strong partnerships. Partnerships like Grace Community Baptist Church who lends them this space for workouts. Also, a lot of the coaches are not getting paid.

“I feel great. I love what I do," said Sean Himel, a volunteer. "Not just because it’s helping someone else. I love boxing and because these kids are amazing. It’s not like they’re some delinquent kids. They’re really good kids.”

Captain Boykins said this boxing club serves another purpose as well. He believes it bridges a gap between the kids on the streets and the officers trying to protect them.

"Being a police officer in South Bend it kind of shows us in a different light with the people and to those who may not be familiar with police officers that much," said Captain Boykins. "We’re trying to get that connection with the community.”

Some of the lessons learned include things like respect, and why getting good grades is important.

“They told me to do good or I can’t come to boxing no more," said boxer Asia Bingham.

The club is completely free and if you're interested, just stop by the Grace Community Baptist Church on Monday or Wednesday nights at 5:00 p.m.