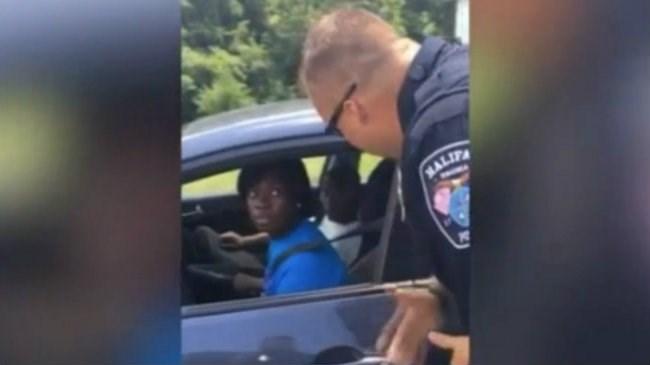 (CNN) -- What's up with officers and ice cream lately?

Now a Virginia police department is getting in on the act, pulling over unsuspecting drivers and handing out ice cream cones.

This latest attempt at developing better relations between police and the communities they serve comes from Halifax, Virginia, where Police Chief Kevin Lands and his officers have been stopping drivers and making them aware of "Vehicle code 1739" -- driving on a hot day without an ice cream cone.

One such stop was captured on video, which has been viewed more than four million times on Facebook.

Officer Brian Warner told CNN affiliate WSET they pulled over 20 people Friday, but handed out cones instead of tickets.

The shocked reactions from the drivers, especially from the young lady in the video, well, that was just icing on the ice cream cake.

"Her reaction was absolutely the best," Warner said. "It was genuine, and she had us smiling and laughing for a good hour afterwards, and I've probably watched the video myself 50 times just laughing... and that's one of the great things with police work you get to meet people like that on a daily basis, and it makes the job worth it."

Halifax's police department is small -- just five officers -- but their patrol cars have a cooler full of frozen treats, so if you're driving safely through town and get stopped, don't sweat it. Chances are they'll let you go with a sweet warning.