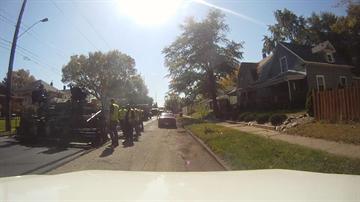 SOUTH BEND, Ind. – Drivers are fighting through slow construction traffic as workers ramp up to beat the coming winter season.  What has drivers especially annoyed with this increased work is that traffic on many major roads over the St. Joseph River between South Bend and Mishawaka is almost at a standstill.

"I got to find alternate ways, but there's no alternate ways to get here," explained Cookie Cook sitting outside of Irene’s Café near the Church/Main Street construction project.

At Main/Church crews are digging into the ground laying sewer work and asphalt for the new Main Street Corridor in Mishawaka.  Traffic is slow on the narrow two-lanes that pass by the work.  But, with other projects across Mishawaka from Main Street, Logan Street, Dragoon Trail and the Capital Avenue project commutes are getting longer.

“It took me about 15 or 16-minutes to get here,” described Cook, whose commute is usually 4 or 5-minutes long.
Officials say the work on Church/Main is going according to schedule, but this week that’s not the only traffic problem.

"It's been very stressful today, obviously, if you can see most everything's blocked off on my corner," explained Laura Reeder, who works at the Low Bob’s Discount Tobacco store at the corner of Logan Street and Mishawaka Avenue.  “Business has been slower too.”

Reeder explained that her once 20-minute commute from southern Mishawaka is now 35-minutes.  She also scraped her car on a pole Wednesday morning trying to navigate around the construction traffic.

"All this damage here came from trying to avoid the traffic jams,” she said, pointing to the large scrape on the side of her car.

City officials explained that crews are ramping up to finish projects before winter comes and shuts-down construction.

"For me it doesn't seem like a good idea, I know it's for the greater good, I know we need good streets for the winter,” she explained.  “But, it's very frustrating to have to deal with trying to find a route."

According to officials all projects are currently on schedule to be completed before winter.  The Logan Street repaving should be done by the end of October.