Trains are up and running again on Hudson rail 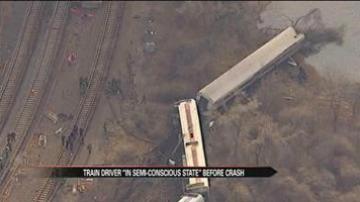 NEW YORK CITY -- For the first time in four days trains are up and running on the Hudson Rail Line that carries commuters in and out of New York City.

The man who was driving the train told investigators he was in a "semi conscious daze" before the train flew off the rails going more than three times the speed limit.

The NTSB says alcohol tests on the train's crew members have all come back negative.

Investigators found no problems with the brakes or signals.

"Look, we can't make mistakes in our business.  Because when we make mistakes, we have stuff like this.  Unfortunately this is a very tragic," said Anthony Bottalico with the Association of Commuter Rail Employees.

The federal government is requiring that management set up a confidential system for workers to report safety concerns.