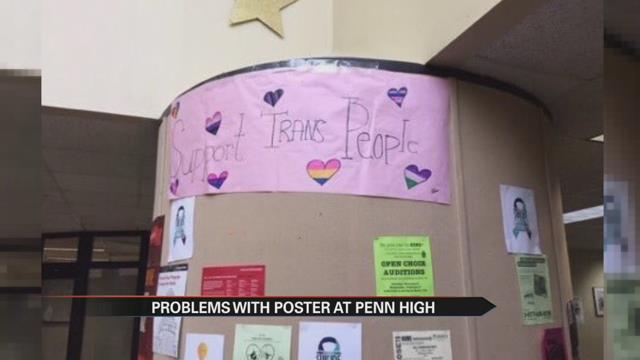 *Correction: It was stated in the piece that aired Friday evening that a poster reading "Support Straight PPL" replaced the "Support Trans People" poster in question inside Penn High School. Since airing, it has been learned that the "Support Straight PPL" poster was actually placed beneath the "Support Trans People" poster, meaning both posters were at one point hanging, in full, inside Penn High. This correction has also been made in the web story below.*

A poster being repeatedly torn down inside Penn High School is making some students feel unsafe.

“Our school must always be a place of tolerance,” Penn High School Principal Steve Hope said in an email to the student body Friday. “We practice tolerance by treating one another with respect and dignity.”

The Friday afternoon email came two days after a poster hung up by the Penn Gay Straight Alliance (GSA) saying “Support Trans People” was torn down -- but not before a poster reading "Support Straight PPL" was placed directly underneath the sign supporting transgender people.

According to one student, it was the fifth time the poster was torn down.

“It just really shows that we need to be doing something,” Penn High School Senior Alexa Bruetman said.

Bruetman is one of many Penn students who saw a tweet posted by a classmate on Wednesday that expressed frustration that the poster kept getting torn down. The tweet has since been shared nearly 400 times.

“I think the LGBTQ community at Penn, they’re very aware that this is a message that needs to be spread because, like, they know best,” Bruetman said. “If they’re saying that the trans people need support, then I would trust their opinion and say that they’re not getting the support that they need right now.”

The tweet set off a firestorm of posts by other Penn students.

“I do not feel safe at Penn High School,” one read.

“Lol who ever [sic] tore down the trans gender [sic] sign props to you…ur [sic] a savage,” another read.

“considering [sic] its [sic] taken me such a long time to come out as trans, these posters being ripped down literally makes me afraid to attend school,” one more said.

When asked if she felt Penn is an accepting environment for LGBTQ students, Bruetman, who is straight, said it depends.

“I mean, a lot of us try to be [accepting],” Bruetman said. “It can be really split because of the amount of students there, because there’s a good 3,000 kids at this school.”

Bruetman said teachers and the administration at the school do try their best to be accepting, in her opinion, but she said this poster incident is a last straw.

“I’m hoping it’s addressed, like, really openly, and stop being like a hush-hush thing that we can’t talk about,” Bruetman said.

Principal Hope ended his email to the students saying, “The rights of lesbian, gay, bisexual, transgender and questioning students are human rights.”

He added, “Penn High School has always and will continue to support human rights for all.”

Penn’s communications director said guidance counselors have been meeting with students impacted by the controversy.

Hope said the administration has disciplined the students who destroyed the posters.