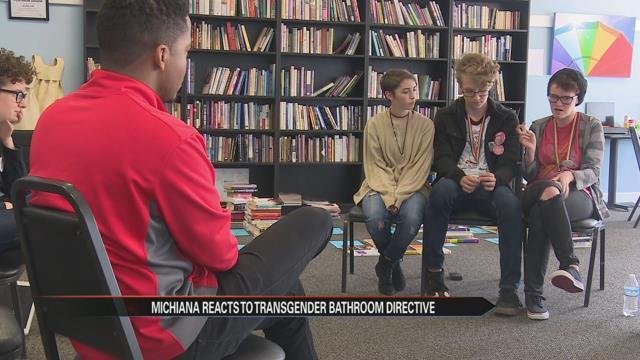 Friday, The U.S. Departments of Justice and Education released a joint directive advising all public schools to allow students to use the gender-specific facilities they identify with.

Transgender students in Michiana are hopeful this will be a welcomed change at their schools.

“I don’t feel comfortable in the boy’s bathroom and I’m not safe in the girl’s bathroom so I just don’t go,” said Charlotte Stewart, Mishawaka High School Sophomore.

But she and two other transgender teens say their schools have been willing to adapt to their needs.

According to the students, Mishawaka High School, Clay High School and John Adams High School all have designated gender-neutral facilities for them.

“But at the same time I would prefer to not have to be super secluded and go way out of my way to go to the bathroom,” said River Rice, John Adams High School Sophomore.

River, a transgender boy, might not have to go out of his way anymore.

The federal guidance released Friday calls for all public schools that receive federal funding to grant transgender students the right to choose their restroom.

“I was really happy I almost cried, it was such a good thing to read,” said Stewart.

But quite a few families had different opinions.

A few families had mixed reactions and many parents felt uncomfortable with this decree.

Many felt safety would be an issue, a concern the transgender community has heard before.

“Most of the time it’s a lot of people that don’t identify as transgender,” said Sam Mendez Adams, Clay High School Freshman.

But even amid parental negativity, these teens are hopeful the positivity they’ve received thus far will translate to true inclusion at their schools.

“I was out at school beforehand because my peers were all accepting,” said Adams.

ABC 57 reached out to Penn-Harris-Madison schools for a response to this federal guidance.

A representative for the district said they were still reviewing the document.

A representative from South Bend Community Schools Corporation said they are committed to being inclusive:

“SBCSC currently has a number of policies which prohibit discrimination. In January 2016, we provided training to our principals specific to transgender issues. This training included suggested best practices for addressing transgender matters in a supportive and non-discriminatory manner. South Bend Community School Corporation's priority at all times is to keep its students feeling safe and welcome in all of our schools.”