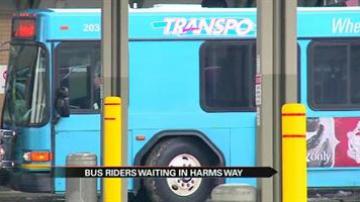 ST. JOSEPH COUNTY, Ind. -- Bus service in St. Joseph County was suspended for a day and a half because of the cold temperatures. TRANSPO has resumed service, but most bus stops aren't cleared of snow, making it difficult for riders to wait.

Zach Timberlake had difficulty waiting for a TRANSPO bus Thursday.

"They don't clear the sidewalks or nothing, and I got to stand in snow like this high up to my knees," said Timberlake.

Even though the storm brought a lot of snow, that isn't what forced the shut down.

"If somebody missed a bus and bus only comes once an hour, it can really become hazardous and ultimately potentially deadly," said Cangany.

Timberlake says he knows all about hazardous since he's been falling over snow banks and walking in the streets for the past few days.

He would drive-but he's not allowed.

"I have seizures so the doctor told me not to drive, so I'm stuck the rest of my life riding the bus," said Timberlake.

Timberlake wasn't the only one who had difficulty with too much snow at the bus stop.

"Going to my bus stop I slipped and fell today. It was horrible," said Dominique Brown.

"They need to make the buses warmer and they need to clear out the bus stop," said Charlotte Logan.

TRANSPO has turned up the heat on the buses, but if you want to wait at a bus stop that's clear of snow - you will have to bring your own shovel.

"We have not cleared any bus stops or any areas for passengers to wait so that's really been up to the community to make sure areas are clear and the street department and things like that, but in terms of our facilities we've worked and spent countless hours," said Cangany.

TRANSPO had half a dozen snow detours in place for the buses on Wednesday-to avoid streets and areas that still were not plowed.

Thursday they had just three detours.

They hope to have the routes back to normal on Friday.