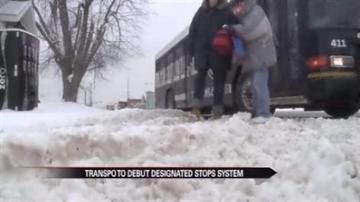 SOUTH BEND, Ind. -- TRANSPO is making some major changes to help the bus system run more smoothly and to keep you safe.

Currently, people gather on a corner and try to get the bus drivers' attention. It's called the flag stop system, and it's the way it has always been in South Bend.

"Well, the best thing I've learned to do is get my bus pass out and then just wave it and the bus driver sees it and he knows to stop." explained Tina Robinson, a lifelong TRANSPO bus rider.

But this year, TRANSPO is saying out with the old and in with the new.  They are one step closer to debuting the designated stop system.

"It's an opportunity for us to ensure that we're providing the best possible service out there by stopping at only safe locations for passengers to board," said the General Manager of TRANSPO, Daivd Cangany.

Cangany says the new bus stops will be marked with signs, will always be clear of snow, and they will be well lit.

With this new system, there will be more than a thousand bus stops along the current TRANSPO routes.

TRANSPO has received over 1700 requests for bus stops.

"We took a lot of what the passengers had to say because they are folks that are out there every day riding our system."

Most passengers and bus drivers are excited about the changes, they say it will be beneficial for everyone.

TRANSPO is holding an event on February 19 at the South Bend Public Library. They are going to debut the plan for exactly where the designated stops will be located and they hope to get feedback from the community before finalizing the plan.

TRANSPO will start putting the bus stops up this summer.