Transpo routes to change; several buses off the streets drivers out of work 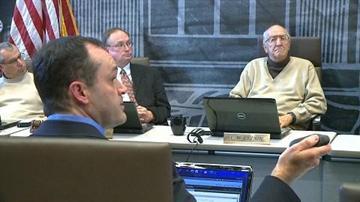 SOUTH BEND, Ind. – Monday afternoon, the Transpo officials voted to accept a plan that eliminated route 2, as well as nine buses and their drivers in an attempt to save money and streamline service.

Chairman of the South Bend Transportation Corporation, John Leszczynskiv, blamed the cuts on reduced revenue from property tax caps and a drop in ridership because of poor service.

Riders had complained that some buses would simply pass them by if they were running late, said Leszczynskiv.

He explained how previously there were no designated bus stops and that people could flag down the passing bus in front of their house if they wanted to.

This practice started to put buses behind schedule when they would have to make several stops on a set of blocks, instead of one or two.

Leszczynskiv also said some of the routes themselves were just too long.

By reorganizing the routes, and creating set pick up and drop off locations, the buses are expected to be back to running on schedule.

The bus stop locations are a project Leszczynskiv expects to take a year or so to accomplish.

In the meantime, Route 2 will be eliminated, but other routes will pick up the slack by covering portions of it. Route 4 will cover the lion’s share.

By getting buses back to running on schedule Transpo hopes to recapture the business of riders who have walked away from the public transportation because it was unreliable.  “We’re going to be there so you can walk out of your house and be at the corner the exact time that we told you that the bus was going to be there,” said Leszczynskiv.

Transpo employees will also be riding the buses running on routes that will experience changes, in order to meet with the riders in those areas, answer questions, and assist them with figuring out where to go to be picked up after the changes take effect.

“We’re going to show them the new schedules, this is the time you’ve got to be there,” said Leszczynskiv “You know do a lot of handholding.”

The route reorganization and elimination of nine buses and their drivers is expected to save Transpo more than $1 million annually.

Riders can expect to start seeing changes to the routes around April 1, according to Leszczynskiv.