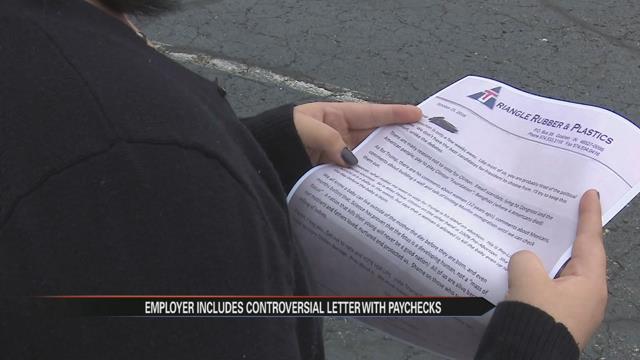 With the election right around the corner, Triangle Rubber and Plastics’ CEO is trying to convince his employees to side one way.

In a letter he sent out with paychecks on October 25, he wrote,“Please, I beg you. Get out to vote, and vote for life. Vote Trump/Pence.”

It didn’t go over so well with Dianela Mendoza’s parents, who work at Triangle.

“She got very mad and ripped hers up, and then told me about it, and then when I got home, my dad asked me to read the letter and I read it, and I got angry, because I couldn’t believe an employer would do that,” said 19-year-old Dianela Mendoza.

So she posted the letter on Facebook, saying “What the heck is this? My parents just received a letter with their paycheck being asked by their employer to go out and vote for Trump. Are you freaking kidding me?”

Dianela says the part that angered her the most was when the CEO seemingly dismissed Trump’s past transgressions and offensive comments.

“He kind of made it seem like Trump’s comments about women about Mexicans about immigrants was nothing,” said Mendoza.

Some agree with her outrage.

“Well, yeah, this is the definition of creating a hostile work environment,” wrote Laura Hall on Dianela’s Facebook post.

Others didn’t find it offensive.

“I’m sure there are many people who would be glad to work for this CEO,” commented Jill Suver.

“I fell it creates just like fear in general, because like Friday my mom went to work scared, scared that she would end up getting fired that day for my post,” said Mendoza.

Luckily, her mother is still on the payroll.

We reached out to CEO Paul Gerwels for comment, but we weren’t able to get in touch.