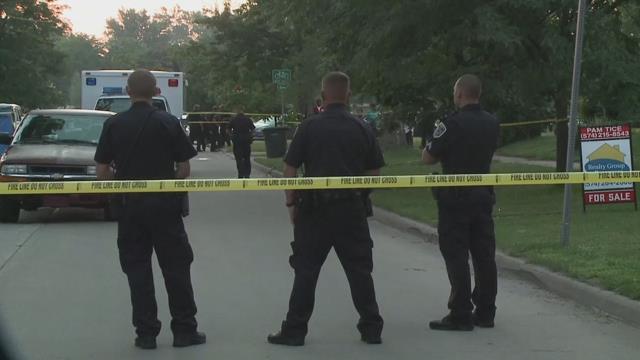 A triple shooting in Elkhart Sunday night left three people dead. Elkhart Police Department is on the search for two men in masks, who they believe strong-armed their way into a home on Strong Ave.

The initial call to police came in shortly after 11 p.m., and they responded immediately to the scene.

A crowd of approximately 50-100 crowded the scene, distracting police from conducting the investigation.  At least two people broke the police perimeter, and were arrested for interference.

Elkhart County Prosecutor, Curtis Hill, said that the unruly crowd distracted police from gathering evidence.  He said that police had to call for additional resources to maintain the crowd, and this detracted attention from the homicide investigation.

Neighbors say this is a typically quiet neighborhood, and haven't been this close to anything like this before.

While the names of the victims have not been released by the Elkhart Police Department, ABC57 was able to speak with one of the victim's ex-fiance.

Angel Wilson said that her first reaction when she heard the news, was that people were lying to her.  She did not believe it.

She stayed on the scene for hours, waiting for his body to be removed - hoping for some closure.

The Elkhart Police Department said that there were four children and three additional adults inside the home at the time of the shooting.  They said they did not believe any were physically injured.

Anyone with information on the victims or the homicide, is encouraged by the police department to come forward and help them resolve this case.