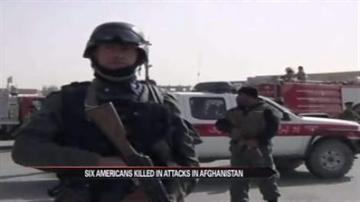 American troops, civilians and an Afghan doctor were killed in attacks overseas Saturday.

Three US service members and two US civilians were killed when a suicide bomber detonated a car full of explosives.

Another American was killed in an attack in Eastern Afghanistan.

These deaths bring the number of foreign military forces killed this year to 30. That includes 22 Americans.

No one has taken responsibility for these attacks.