Troops to deploy to Spain 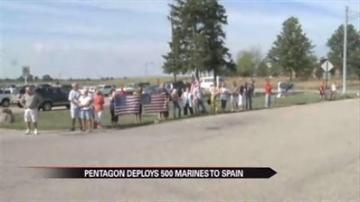 The first of 500 troops are deploying to the southern tip of Spain to protect US citizens across the strait in Africa.

The Pentagon says the new task force of Marines will have quick access to northern Africa where security concerns are growing.

The Marine unit will add extra protection for US embassies and diplomatic compounds under threat.

The move comes after the September 11 attack in Benghazi that killed an American diplomat.