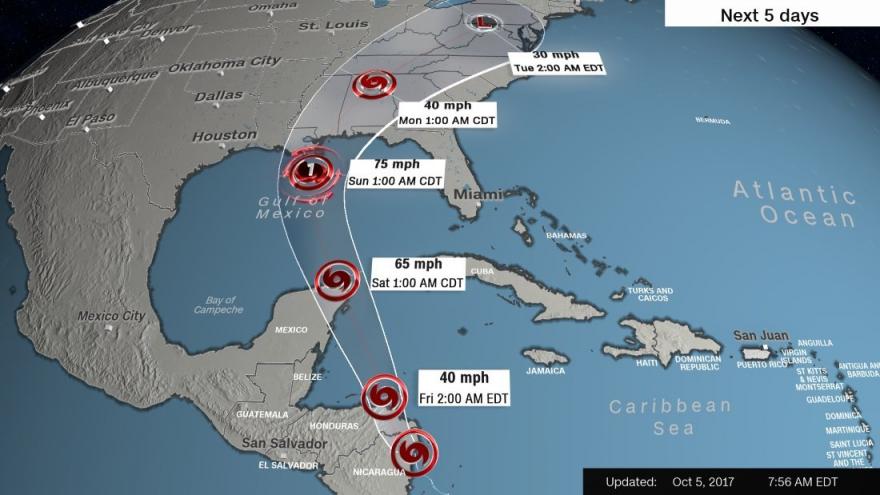 (CNN) -- Tropical Storm Nate moved across northeastern Nicaragua and into eastern Honduras, as early forecast models showed it taking aim this weekend at the northern US Gulf Coast, likely as a minor hurricane, according to the National Hurricane Center.

Nate's forecast track had shifted slightly by late Thursday morning, putting New Orleans -- and its compromised drainage system -- directly in the storm's sights, with landfall predicted midmorning Sunday along the Louisiana coast as a hurricane.

Additionally, offshore oil and gas operators have evacuated personnel from six of the 737 manned oil and natural gas production platforms in the Gulf of Mexico, according to the Bureau of Safety and Environmental Enforcement.

Unlike drilling rigs, which usually move locations, production platforms stay in the same location during a project. One drilling rig was moved out of the storm's predicted path as a precaution.

Nicaragua and Honduras at risk

Nate's maximum sustained winds had increased by Thursday to 40 mph, with the storm forecast to remain close to that intensity all day as it moved inland over Nicaragua and Honduras, forecasters said.

Life-threatening flash flooding and mudslides were possible in the Central American nations, with extreme rainfall totals of 15 to 20 inches possible in Nicaragua and up to 8 inches predicted for Honduras. A tropical storm warning was in effect from Sandy Bay Sirpi, Nicaragua, to Punta Castilla, Honduras, and from Punta Herrero to Rio Lagartos, Mexico, the hurricane center said.

After crossing over Central America, Nate was expected to move back into the warm waters of the western Caribbean, CNN forecasters said. There, the storm could strengthen and experience an increase in forward speed, though the Yucatan Peninsula could inhibit its growth.

Some forecast models had predicted Nate would become a much stronger hurricane and make landfall on the Florida Panhandle, but those models now have fallen more in line with predictions of a landfall along the central Gulf Coast, CNN meteorologist Brandon Miller said.

Still, many factors will play a role in Nate's development through the weekend, he said.

"How much Nate is able to strengthen once it hits those warm waters depends a lot on how intact the center of the storm can maintain as it traverses land," Miller said. "If it gets ragged, it will take some time to reform over the ocean, and that will mean less time to gain in intensity.

"But if it manages to stay together while over Central America, it will be able to take advantage of those warm waters and quickly strengthen, maybe even undergo 'rapid intensification,'" he said.

Rapid intensification occurs when a storm's maximum sustained winds increase at least 35 mph in 24 hours or less. Hurricanes Harvey, Irma, Jose, and Maria all underwent the phenomenon on their way to becoming major hurricanes earlier this season.

New Orleans Mayor Mitch Landrieu met Thursday morning with local, state and federal officials, including representatives of the US Army Corps of Engineers and Louisiana National Guard, to discuss preparations for the possibility of hurricane conditions, his spokeswoman said.

Of New Orleans' 120 drainage pumps, a dozen -- including three major pumps -- were out of service Thursday morning for repairs or maintenance, according to the most recent records posted online by the city-owned Sewerage & Water Board.

One major pump that remained offline was located at the city's largest-capacity pump station in the Lakeview neighborhood; it serves a heavily populated swath along the city's western edge and a large section of neighboring Jefferson Parish. Another major pump in nearby City Park was out of service. The third was across the Mississippi River, in an area known as Algiers.

The other pumps that weren't working were relatively small and included some that operate constantly to clear streets of runoff from daily usage, records show.

The water board also had backup generators at all 24 of its major pump stations, including 11 temporary generators, records show. Those generators were installed recently after one of five turbines that help power the city's oldest, most powerful pumps failed, exposing a lack of backup power at many locations. Three turbines were available for service Thursday, a water board spokeswoman told CNN.

At a press conference Thursday evening, Gov. John Bel Edwards said he will position National Guard troops in New Orleans to help the city in monitoring pumps. He said that he's been in regular contact with Landrieu to make sure the state is supporting the city.

"We've had a number of threats this hurricane season, and we've been blessed when Harvey went left and Irma went right," Edwards said. "That is not what we anticipate out of Nate, so everyone should take this very seriously."

Edwards authorized 1,300 National Guard troops to mobilize ahead of the storm, and he said he will ask President Donald Trump to declare a pre-landfall state of emergency for the state.

In a statement from his office on Thursday, Landrieu declared a state of emergency for New Orleans and urged residents to stay put throughout the weekend.

Outside the bull's-eye, Florida still prepares

Though Nate's forecast track only included a small patch of the western edge of the Florida Panhandle, Gov. Rick Scott activated the highest level of his state's emergency response plan. He also encouraged residents to get prepared and stay alert in case the track changes and evacuations become necessary.

"Just think about your family: Get your three days of water, three days of food; if you're taking medicine, make sure you have your medicine," he said during a morning news conference.

With some parts of Florida still reeling from Hurricane Irma, Scott warned residents not to become complacent.

Scott declared a state of emergency for 29 counties in order to make sure local governments have sufficient time, resources and flexibility to prepare for Nate, according to a press release from his office.

"I have continued to be briefed by the Florida Division of Emergency Management on Tropical Storm Nate, and while current forecast models have the storm's center west of Florida, we must be vigilant and get prepared," he said.

Nate takes aim in the waning days of the peak period of a hurricane season that has ravaged the United States the Caribbean.

Though the season lasts from June 1 to November 30, storm activity hits its statistical peak on September 10, with the eight weeks surrounding that date considered a "season within a season," according to the National Oceanic and Atmospheric Administration.

Owing in part to those factors, hurricanes this year have left catastrophe in their wake: Harvey caused historic flooding in Houston; Irma devastated the Florida Keys; Katia triggered deadly mudslides in Mexico; and Maria left Puerto Rico and nearby islands in ruins.

Experts had warned that this season carried the "potential to be extremely active." So far this year in the Atlantic, there have been six tropical storms and eight hurricanes.