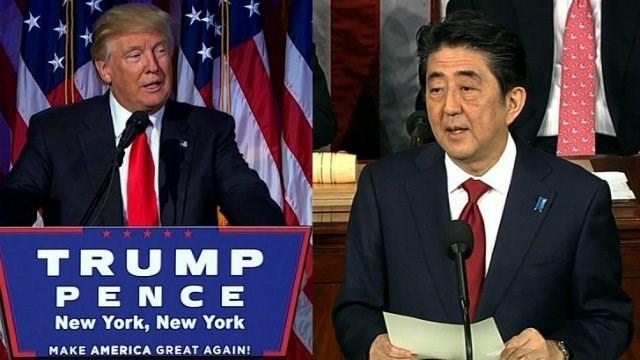 The pair met in New York in an "unofficial" capacity, Abe told reporters, as Trump has not yet assumed the presidency.

Abe stressed that he emerged feeling that the US and Japan will be able to maintain a "relationship of trust" with Trump as president.

The sit-down with Abe was Trump's first in-person meeting with a foreign head of state since he clinched the presidency last week.

It comes after Trump's repeated suggestions during the campaign that Japan should shoulder a bigger financial burden regarding US military forces stationed in the region.

"I am very honored to see the President elect ahead of other world leaders," Abe told reporters before his departure.

"The Japan-US alliance is the axis of Japan's diplomacy and security. The alliance becomes alive only when there is trust between us."

A top aide to Abe, Katsuyuki Kawai, said that he'd been told by members of Trump's transition team that Trump's previous remarks should not be taken literally.

Abe declined to say if the two men hashed out the defense issue or discussed their disagreement over the Trans-Pacific Partnership (TPP) trade deal, but stressed that he emerged "convinced that Mr. Trump is a leader in whom I can have confidence."

"I conveyed my various views on different issues, but since he hasn't assumed the office, I would like to refrain from touching on details," Abe said.

The President elect and his team have not followed what is considered normal protocol in Washington D.C.

His transition team has yet to contact the Pentagon, State Department or other federal agencies.

It is also unclear in what order he has spoken with world leaders. A list issued Wednesday by his transition team details who he and Vice President-elect Mike Pence have spoken to but didn't give further details.

Australia's Malcolm Turnbull was only able to land a phone call with Trump after golfer Greg Norman helped tee it up.