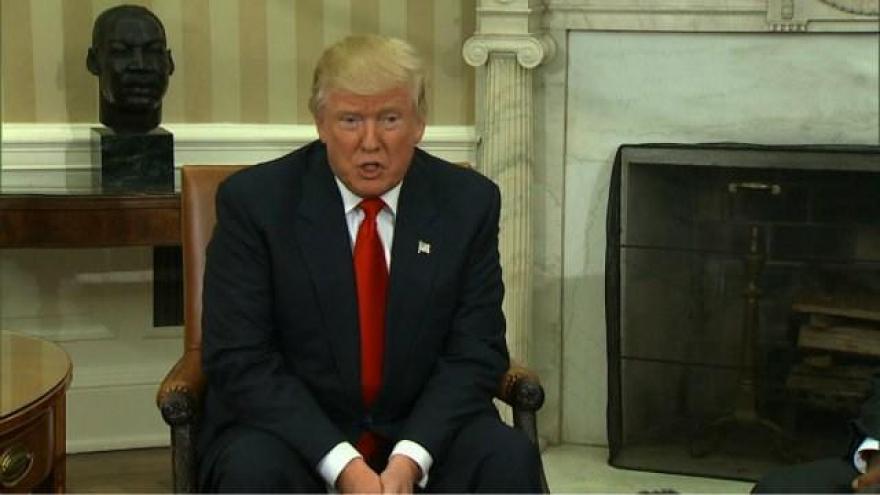 WASHINGTON (CNN) -- President-elect Donald Trump appeared open Friday to compromising on his oft-repeated pledge to repeal and replace Obamacare -- citing a conversation with none other than President Barack Obama himself.

But the openness was complicated by a shift in the official positions listed on his website.

The comments, made in an interview with the Wall Street Journal, signal less of a policy shift for Trump than a change from the rhetoric that helped win him the presidency just three days ago and could set up a fight with conservatives.

Trump told the paper he was reconsidering his stance after Thursday's meeting with Obama, who urged him to protect parts of the law. Trump said he would like to keep the provision forbidding discrimination based on pre-existing conditions and to allow young Americans to remain on their parents' healthcare plans.

"Either Obamacare will be amended, or repealed and replaced," he said, acknowledging that it was Obama, who met with Trump in the Oval Office for 90 minutes, who encouraged him to reconsider. "I told him I will look at his suggestions, and out of respect, I will do that."

Trump reiterated his plan in an interview with CBS's "60 Minutes" to ensure individuals with pre-existing conditions continue to have coverage.

"Yes, because it happens to be one of the strongest assets," Trump said.

Trump went on to explain to CBS that he would also try to keep the measure that allows young people to stay on their parents' insurance plans until age 26.

When pressed about the time between repealing and replacing Obamacare, Trump assured CBS correspondent Leslie Stahl that the two would happen "simultaneously."

But the President-elect did not offer a replacement plan.

Trump also told the Journal that he would bring the country together and that "I want a country that loves each other." But that grace did not extend to any reflection on his coarse rhetoric.

When asked about whether his language was inappropriate, Trump said: "No. I won."

Trump's positions on Friday are not entirely new, as he's previously voiced support for certain parts of Obamacare as a candidate. But the statement, three days after Americans elected him president, is a fresh sign that he may be willing to distance himself from some of his campaign positioning, such as calling for the immediate repeal and replace of Obamacare.

And it's a far cry from what Trump uttered during the primary to his boisterous fans at rallies.

"Look at the mess, and look at the corruption," Trump said at a rally just a day before Election Day in Scranton, Pennsylvania. "Real change begins immediately with the repealing and replacing of the disaster known as Obamacare."

Also on Friday, The Washington Post reported that Trump has revised his health care agenda to steer it more in line with Republican Party orthodoxy.

The paper said the presidential transition website has been edited to now include allowing health care workers to not perform acts that would violate their religious or moral beliefs and to "protect innocent human life from conception to natural death."

The paper also said the website omits Trump's call to allow Americans to import prescription drugs from other countries where they are sold at lower prices.

Trump has previously voiced support for other provisions of Obamacare.

At CNN's town hall in February, Trump said he likes the Obamacare mandate that requires every American to be insured. He went even further in a "60 Minutes" interview last year.

"Everybody's got to be covered. This is an un-Republican thing for me to say," he told CBS's Scott Pelley. "I am going to take care of everybody. I don't care if it costs me votes or not. Everybody's going to be taken care of much better than they're taken care of now."

But in his plan, he says: "Our elected representatives must eliminate the individual mandate. No person should be required to buy insurance unless he or she wants to."

At CNN's GOP debate in February, Trump said he would get rid of Obamacare but maintain the provision that insurers must cover people with pre-existing conditions.

"I want to keep pre-existing conditions. I think we need it. I think it's a modern age. And I think we have to have it," he told Dana Bash.

His plan, however, offers no defense of those with pre-existing conditions. Instead, he said Obamacare must be repealed "completely."

Not letting people 'die in the streets'

Trump was most emphatic when talking about having the government take care of poor people who are sick.

"You cannot let people die on the street, OK? Now, some people would say, 'That's not a very Republican thing to say.' Every time I say this at a rally ... it got a standing ovation," he said at a CNN town hall in February. "The problem is that everybody thinks that you people, as Republicans, hate the concept of taking care of people that are really, really sick and are gonna die. We gotta take care of people that can't take care of themselves."

On the trail, Trump sketched different ways of accomplishing this. He's mentioned making deals with hospitals and "concepts of Medicare."

But in his plan, he only says that no one should slip through the cracks because they can't afford coverage. While he wants to repeal Obamacare's Medicaid expansion provision, he says it could be accomplished by reviewing "basic options for Medicaid" and working with states to ensure health care is provided to those who want it.