Trump arrives in Paris on second Europe trip in a week 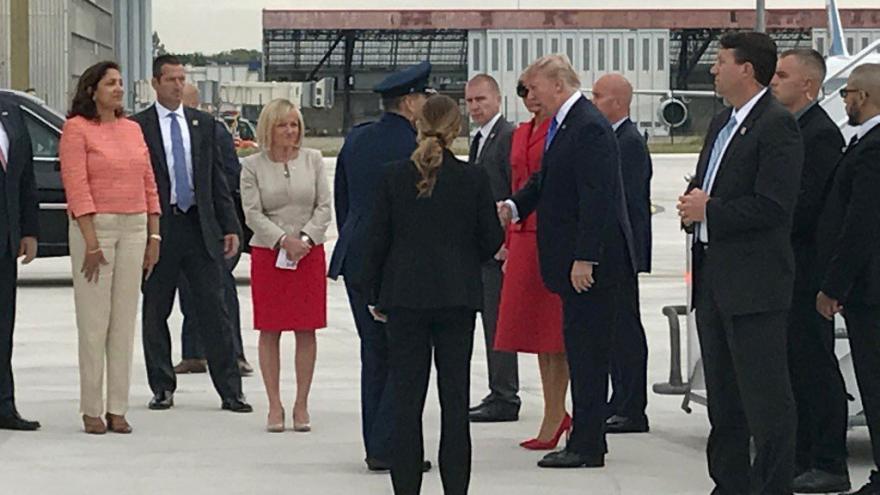 PARIS (CNN) -- US President Donald Trump arrived in Europe for the second time in a week, a trip meant as a pomp-filled celebration of transatlantic ties at a time of anxiety on both continents.

Air Force One landed at Paris Orly airport, south of the city center, early Thursday morning. From there, Trump's took meetings at the American ambassador's residence before being greeted in a formal welcoming ceremony by his host, French President Emmanuel Macron.

He was treated to a grand display of French splendor in the courtyard of Les Invalides military complex: a brass band to play the national anthem, a full review of troops, a warm handshake from Macron, France's charismatic new leader and a European double kiss from Macron's wife Brigitte.

The trip may provide Trump at least a short interlude from the political crisis swirling back home around a meeting between his son, Donald Trump Jr., and a Russian lawyer during last year's presidential campaign.

The American leader toured Napoleon's tomb at the Les Invalides before sitting down for extended security talks with Macron at the Élysée Palace. The pair will take questions from reporters in the evening, and dine with their wives in a Michelin-starred restaurant on the second landing of the Eiffel Tower.

Trump himself has remained out of sight since returning late Saturday from Hamburg, where he attended a high-stakes Group of 20 summit and met with several foreign leaders, including Russian President Vladimir Putin.

Macron, who was elected decisively in May and bolstered by legislative successes for his new political party, views himself as a bridge between Europe and the United States, his advisers have said. Rather than isolate Trump, Macron hopes to keep the US leader within the fold of other western democracies.

Macron appears uniquely positioned to assume the role of Europe's primary interlocutor with Trump. Unlike German Chancellor Angela Merkel, who faces reelection in September, or British Prime Minister Theresa May, who was dealt a political blow in last month's snap election, Macron is unencumbered by looming political baggage that would distract from a close relationship with the US president.

But while both men exude alpha-male tendencies, their differences are readily apparent. At 39, Macron is the youngest French president in modern times; the 71-year-old Trump is the oldest elected US president in history.

And their first meeting was marked by aggressive body language: Macron gripping Trump's hand for an extended shake, their eyes locking as cameras clicked away.

Macron later said the aggression was intentional, but at last week's G20 summit in Germany the two men appeared far more relaxed. The French leader seemed intent on standing next to Trump during group photos, a reminder of his self-assigned role as Trump's European contact point.

Macron is eager to develop close security ties with Trump, but in other areas he's already emerged as a vocal critic, most notably over Trump's withdrawal from the climate accord that bears the French capital's name.

Following the announcement, Macron adopted an aggressive stance, telling climate scientists they were welcome in France and mocking Trump's campaign slogan to urge the world to "make the planet great again."

Trump's stop in Paris is designed to mark the 100th anniversary of the United States' entry into World War I, and the security theme will carry over in talks between the leaders, which the White House said would center on Syria and counterterrorism efforts.

Macron hopes to demonstrate to Trump the willingness of France to play a broader role in global security affairs. The country is the second largest contributor to the US-led anti-ISIS coalition, a permanent member of the UN Security Council, and a key actor in counterterrorism efforts in northern Africa.

On Friday, Trump will be the guest of honor at a military parade marking Bastille Day, the national holiday that commemorates the start of the French Revolution.

American troops will march alongside French personnel down the Champs-Élysées. The march will give Trump a view of France's military hardware, but also point to the long history of cooperation between the two countries. The White House said American troops would participate this year, and that three veterans of the 1944 Normandy invasion would also be on hand.

While last week's G20 in Germany was marked by widespread violent protests, the French are not expected to stage large scale demonstrations during Trump's visit here. The security posture has nonetheless been elevated, with 11,000 police and gendarmes deployed on the streets during Trump's visit.

It's an extension of the current state of emergency in France, first put in place after terrorist attacks here in November 2015. Trump has decried the security situation in Paris, lamenting that "Paris isn't Paris any longer" -- and suggesting the city had been overrun by extremists.

A senior administration official downplayed those past remarks ahead of Trump's visit, saying instead that Trump held the city in high regard.