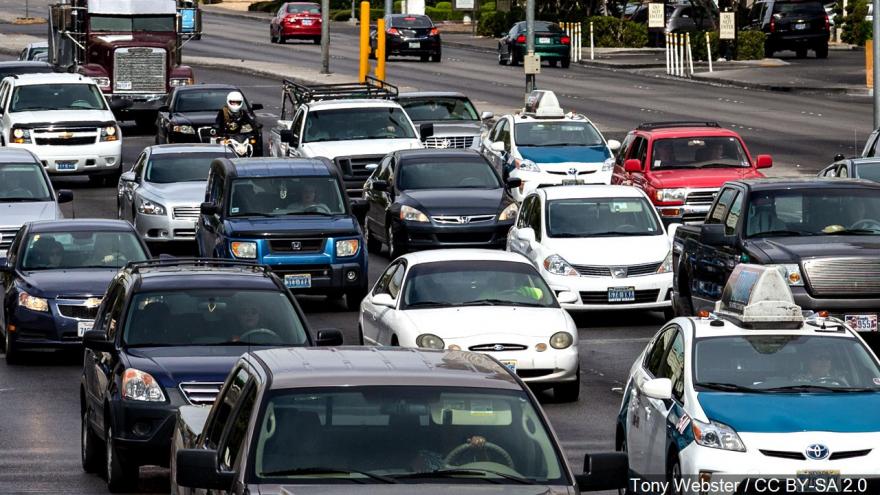 In a tweet, Trump said his action would result in less expensive, safer cars. He also predicted Americans would purchase more new cars, which would result in cleaner air as older models are taken off the roads.

"Many more cars will be produced under the new and uniform standard, meaning significantly more JOBS, JOBS, JOBS! Automakers should seize this opportunity because without this alternative to California, you will be out of business," Trump tweeted.

U.S. automakers contend that without year-over-year increases in fuel efficiency that align with global market realities their vehicles could be less competitive, potentially resulting in job losses. However, most of the industry favors increases in standards that are less than the Obama-era requirements, saying their consumers are gravitating to gas-guzzling SUVs and trucks rather than buying more efficient cars.

Top California officials and environmental groups pledged legal action on Wednesday to stop the rollback, potentially tying up the issue for years in federal courts. The U.S. transportation sector is the nation's biggest single source of greenhouse gasses.

It's not clear yet what the Trump administration will propose as its final fuel-efficiency rules, but in the past it has favored freezing Obama-era mileage standards at 2021 levels. Under the Obama administration requirements, the fleet of new vehicles would have to average 30 mpg in real-world driving by 2021, rising to 36 mpg in 2025. Currently the standard is 26 mpg.

Under Trump, the Environmental Protection Agency contends that freezing the fuel economy standards will reduce the average sticker price of new vehicles by about $2,700 by 2025, though that predicted savings is disputed by environmental groups and is more than double the EPA estimates from the prior administration.

Trump's tweet does not address the money consumers would save at the gas pump if cars got better mileage. A study released by Consumer Reports in August found that the owner of a 2026 vehicle will pay over $3,300 more for gasoline during the life of a vehicle if the standards are frozen at 2021 levels.

Trump's claim that his proposal would result in a cleaner environment is contrary to his own administration's estimate that by freezing economy standards U.S. fuel consumption would increase by about 500,000 barrels per day, a 2% to 3% increase. Environmental groups predict even more fuel consumed, resulting in higher pollution.

The administration argues that lower-cost vehicles would allow more people to buy new ones that are safer, cutting roadway deaths by 12,700 lives through the 2029 model year. But The Associated Press reported last year that internal EPA emails show senior career officials privately questioned the administration's calculations, saying the proposed freeze would actually modestly increase highway fatalities, by about 17 deaths annually.

California's authority to set its own, tougher emissions standards goes back to a waiver issued by Congress during passage of the Clean Air Act in 1970. The state has long pushed automakers to adopt more fuel-efficient passenger vehicles that emit less pollution.

California has 35 million registered vehicles, the most of any state. A dozen other states and the District of Columbia also follow California's fuel economy standards.

"You have no basis and no authority to pull this waiver," Becerra, a Democrat, said in a statement, referring to Trump. "We're ready to fight for a future that you seem unable to comprehend."

Trump's Justice Department recently opened an antitrust investigation into a deal between California and four major automakers for tougher pollution and related mileage requirements than those sought by the Trump administration.

The deal struck in July between California and four of the world's largest automakers — Ford, Honda, BMW and Volkswagen — bypassed the Trump administration's plan to freeze emissions and fuel economy standards adopted under Obama at 2021 levels.

The four automakers agreed with California to reduce emissions by 3.7% per year starting with the 2022 model year, through 2026. That compares with 4.7% yearly reductions through 2025 under the Obama standards. Emissions standards are closely linked with fuel economy requirements because vehicles pollute less if they burn fewer gallons of fuel.

In a speech to the National Automobile Dealers Association on Tuesday, EPA Administrator Andrew Wheeler, a former fossil fuels lobbyist, said California will be able to keep in place and enforce programs to address smog and other forms of air pollution caused by motor vehicles. But fuel economy has been one of the key regulatory tools the state has used to reduce harmful emissions.

"If the courts allow this unprecedented reversal, and the Trump EPA massively rolls back the federal clean car standards, then President Trump will have done more to destroy the planet than any other president in history," said Jeff Alston, a former EPA senior environmental engineer and policy adviser who recently retired after 40 years at the agency.