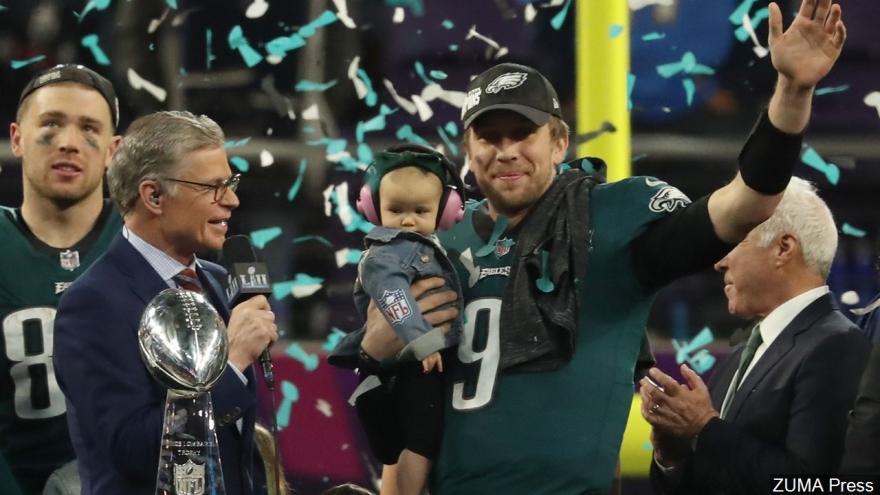 WASHINGTON (AP) — Digging deeper into a culture war that he's repeatedly stoked, President Donald Trump called off a visit to the White House by the Philadelphia Eagles, citing the dispute over whether NFL players protesting racial injustice must stand during the playing of the national anthem.

Trump said in a statement Monday that some members of the Super Bowl championship team "disagree with their President because he insists that they proudly stand for the National Anthem, hand on heart, in honor of the great men and women of our military and the people of our country."

The Philadelphia Eagles Football Team was invited to the White House. Unfortunately, only a small number of players decided to come, and we canceled the event. Staying in the Locker Room for the playing of our National Anthem is as disrespectful to our country as kneeling. Sorry!

He said the team wanted to send a smaller delegation Tuesday, but "the 1,000 fans planning to attend the event deserve better."

Instead, Trump said he would be hosting "a different type of ceremony," featuring the U.S. Marine Band and the U.S. Army Chorus, that "will honor our great country, pay tribute to the heroes who fight to protect it, and loudly and proudly play the National Anthem."

None of the Eagles took a knee during the anthem in 2017.

One of the people set to attend the ceremony told The Associated Press less than half of the team's 53-man roster planned to go. The person spoke on condition of anonymity due to the sensitive nature of the decision.

Philadelphia Mayor Jim Kenney replied with his own statement, saying that he is "equally proud of the Eagles' activism off the field" and that the players "represent the diversity of our nation — a nation in which we are free to express our opinions."

"Disinviting them from the White House only proves that our President is not a true patriot, but a fragile egomaniac obsessed with crowd size and afraid of the embarrassment of throwing a party to which no one wants to attend," Kenney said.

Last week, Eagles safety Malcolm Jenkins said he would not attend the ceremony because he didn't want to be part of a photo op and wanted "to avoid being used as any kind of pawn." In addition to Jenkins, defensive end Chris Long was the most outspoken player against going. Quarterback Carson Wentz had planned to attend.

It was unclear exactly what prompted the change of plans. The White House did not immediately respond to questions about what had sparked the decision and why the circumstances were different from other events honoring winning teams, which some players have boycotted.

Late Monday, though, Trump wrote on Twitter that "Unfortunately, only a small number of players decided to come, and we canceled the event."

Several players asked about Trump's decision not to host them declined to respond. The Eagles issued a statement without directly addressing the White House cancellation.

"Watching the entire Eagles community come together has been an inspiration," the team statement read. "We are truly grateful for all of the support we have received and we are looking forward to continuing our preparations for the 2018 season."

Wide receiver Torrey Smith, who said previously that he planned to skip the visit, responded with a series of tweets.

"So many lies," he wrote, adding, "Not many people were going to go."

Smith, who played on the Super Bowl-winning Philadelphia team before being traded to the Carolina Panthers in March, added: "No one refused to go simply because Trump 'insists' folks stand for the anthem. ... The President continues to spread the false narrative that players are anti military."

He went on: "There are a lot of people on the team that have plenty of different views. The men and women that wanted to go should've been able to go. It's a cowardly act to cancel the celebration because the majority of the people don't want to see you. To make it about the anthem is foolish."

The announcement was the latest signal that tensions remain high around the NFL protests that began in 2016 when San Francisco 49ers quarterback Colin Kaepernick began silently kneeling on the sidelines while the anthem played. Kaepernick's protest was an effort to raise awareness around systemic racism and, specifically, the killing of black men by police.

He was soon joined by teammate Eric Reid. Both Reid and Kaepernick have filed grievances against the NFL and remain unsigned since their contracts with the 49ers expired.

Last season, Vice President Mike Pence left the 49ers game against the Indianapolis Colts after about a dozen San Francisco players took a knee during the anthem. Pence, who left before kickoff, tweeted soon afterward, "I left today's Colts game becaue @POTUS and I will not dignify any event that disrespects our soldiers, our Flag, or our National Anthem."

Trump has repeatedly decried the players' protest, referring to them as "sons of bitches" who should be fired at a rally for supporters in Alabama last year. Last month, the NFL announced a new policy - praised on Twitter by both Trump and Pence - requiring players to stand for the anthem if they're on the field before a game.

During an interview after the new NFL policy was announced, Trump praised the league for doing "the right thing."

Late Monday, Trump added on Twitter: "Staying in the Locker Room for the playing of our National Anthem is as disrespectful to our country as kneeling. Sorry!"

Several members of the Eagles have voiced staunch opposition to the owners' decision.

"This is a fear of the diminished bottom line," Long said last month. "It's also fear of a president turning his base against a corporation. This is not patriotism. Don't get it confused. These owners don't love America more than the players demonstrating and taking real action to improve it."

Jenkins has vowed to carry on the cause.

"I will not let it silence me or stop me from fighting," he said recently. "This has never been about taking a knee, raising a fist or anyone's patriotism, but doing what we can to effect real change for real people."

"I'm proud of what the @Eagles accomplished this year. I'm skipping this political stunt at the White House and just invited the Eagles to Congress. @Eagles How about a tour of the Capitol?" he wrote.

White House legislative director Marc Short said in an appearance on CNN that he didn't know who had canceled on whom, but said, "It's unfortunate when politics gets in the middle of this."