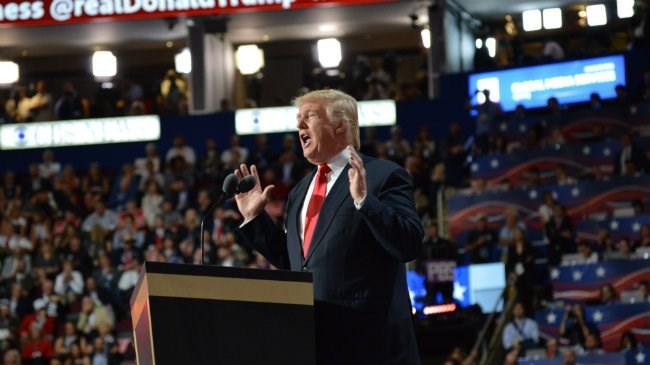 Trump was speaking in advance of a rally at which Clinton launched an explosive new line of attack against the Republican nominee, drawing a line between him and the Ku Klux Klan.

"Now, I have not seen Hillary Clinton's remarks. And, in a sense, I don't want to dignify them by dwelling on them too much, but a response is required for the sake of all decent voters she is trying to smear," Trump said in a fiery speech here frequently interrupted by supporters chanting "lock her up" and "racist!"

"She lies and she smears and she paints decent Americans as racists. She bullies voters who only want a better future and tries to intimidate them out of voting for a change," Trump said. "Hillary Clinton isn't just attacking me, she's attacking all of the decent people of all backgrounds -- doesn't matter -- of all backgrounds who support this incredible, once in a lifetime movement."

Trump did not directly respond to Clinton's claims, laid out in a video earlier on Thursday, that Trump has attracted and at-times refused -- or been slow -- to disavow the support of white nationalists, including the former KKK leader David Duke.

The video features clips of KKK members expressing their support for Trump and also highlights a CNN interview in which Trump refused to disavow Duke and said he knew "nothing about white supremacists." Trump later disavowed Duke's support, but Duke and other white nationalists have continued to boost Trump's candidacy.

Instead of rebutting those claims, Trump stressed Thursday that any attack accusing him of racism or bigotry amounts to one on his supporters, labeling "decent Americans who support this campaign -- your campaign -- of being racists, which we are not."

The real estate mogul then ticked down a list of his campaign's positions and why supporting them does not amount to bigotry.

"People who want their laws enforced and respected and who want their borders secured are not racists," Trump said. "People who speak out against radical Islam and who warn about refugees are not Islamophobes. Enough. They are decent American citizens who want to uphold our values as a tolerant society."

He added: "People who support the police, and who want crime reduced, are not prejudiced."

"Shame on you," Trump said of Clinton's impending barrage of attacks tying him to white supremacists.

Asked by WMUR in Manchester later Thursday if he wanted white supremacists to vote for him, Trump simply responded, "No. I don't at all."

But Trump has drawn fire for more than just his policies, drawing accusations of bigotry for his words about undocumented immigrants, Muslims and African-Americans.

Trump in the fall suggested that a Black Lives Matter protester who interrupted one of his rallies and was attacked by Trump supporters "should have been roughed up" and in June pointed out a black man attending one of his rallies, calling him "my African-American."

Trump also launched his campaign last year by painting undocumented Mexican immigrants with a broad brush as criminals and "rapists." This June, Trump accused a U.S. federal judge of being biased against him because of his Mexican heritage, which prompted Republican House Speaker Paul Ryan -- who endorsed Trump -- to accuse Trump of voicing "the textbook definition of a racist comment."

Trump has also called for banning Muslims from the US on the sole basis of their religion and has stoked Islamophobic sentiment by alleging, "Islam hates us."

Trump last week publicly expressed regret for the first time on the campaign trail for sometimes saying "the wrong thing," though he did not say which of his controversial remarks he regrets.

Trump pointed to Bill Clinton's remark during the heated 2008 primary that Obama "a few years ago ... would have been getting us coffee" and pointed to other "cringe-worthy comments from Hillary Clinton," which Trump did not name.

'Watergate all over again'

Trump also stepped up his criticism of the controversy swirling around the relationship between the Clinton Foundation and the State Department during Clinton's time as secretary of state, calling the controversy a scandal on par with Watergate.

"What is being uncovered now is one of the most shocking scandals in American political history. It's Watergate all over again. It's Watergate," Trump said, referring to the series of political scandals that eventually triggered President Richard Nixon's resignation and landed several Nixon aides in prison.

Beyond leveling attacks pre-empting Clinton's barrage, Trump sought to repaint his campaign as one concerned about the plight of some minority communities in the US and insisted that a Trump administration would promote pluralism and tolerance.

"We will promote the values of tolerance, justice and acceptance. We will steadfastly reject bigotry and hatred and oppression in all of its ugly forms," Trump said.