Trump confirms he is being investigated over Comey firing 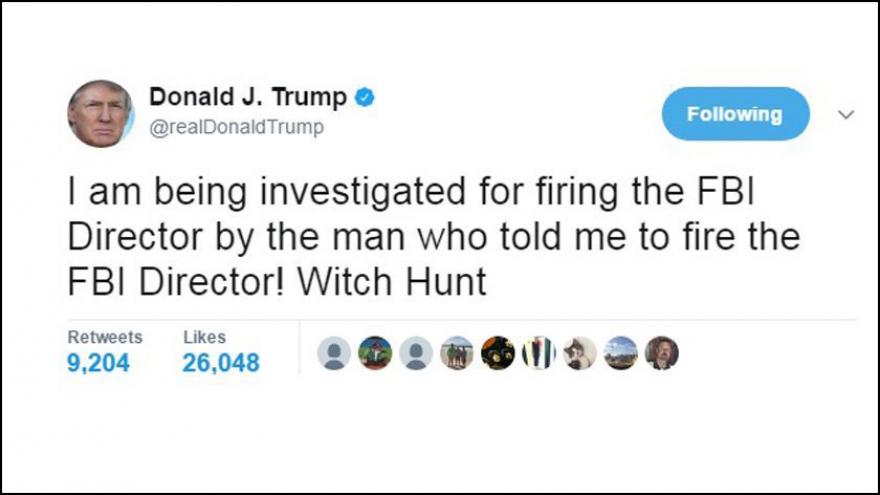 By Kevin Liptak and Jeremy Diamond

(CNN) -- President Donald Trump, in a furious Friday morning message, confirmed that he is being investigated for his role in firing former FBI Director James Comey and seemed to accuse the deputy attorney general of overseeing a "witch hunt" against him.

It wasn't immediately clear to whom Trump was referring, though the man who wrote a memo recommending Comey's firing, Deputy Attorney General Rod Rosenstein, was also the official who approved the appointment of a special counsel to look into Russian election meddling.

Trump's tweet Friday reflected the first official confirmation that he is being investigated by the special counsel for the reasons he fired Comey last month. Trump conceded in an interview after the episode that he was thinking about the Russia controversy when he made that decision.

It was not clear if Trump's comment was based on news reports or if the White House had been given official notice.

Earlier this week, the investigation led by special counsel Robert Mueller appeared to move closer to Trump. The Washington Post reported this week that Mueller is investigating whether Trump attempted to obstruct justice when he suggested Comey drop an FBI investigation into Michael Flynn, Trump's former national security adviser, as well as when he fired Comey.

Investigators in Mueller's office are set to interview Director of National Intelligence Dan Coats and National Security Agency Director Adm. Mike Rogers, a source familiar with the matter has told CNN. Reports have alleged that Trump asked both men to publicly quash the credibility of the Russia investigation.

Trump demonstrated Friday morning that the Russia probe continues to consume his attention, tweeting a stream of messages decrying the controversy.

"After 7 months of investigations & committee hearings about my 'collusion with the Russians,' nobody has been able to show any proof. Sad!" he wrote. "Despite the phony Witch Hunt going on in America, the economic & jobs numbers are great. Regulations way down, jobs and enthusiasm way up!"