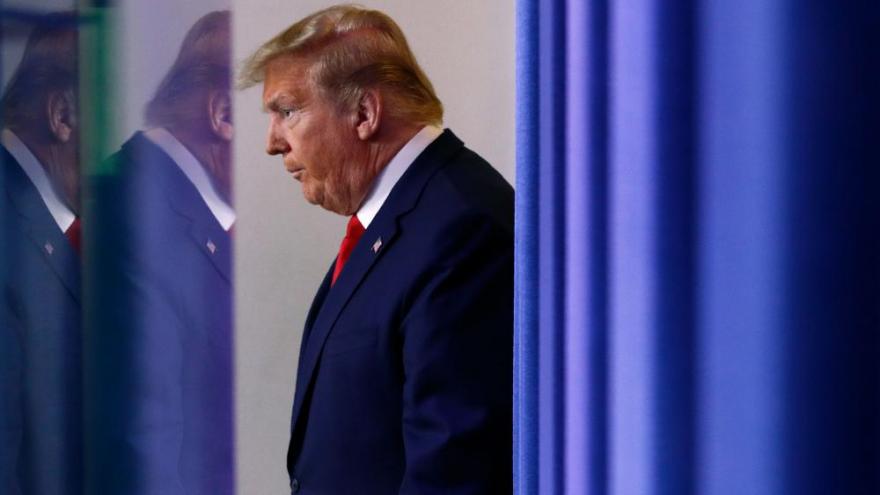 Amid rising tensions with governors, President Donald Trump continued to tout the number of coronavirus tests in the United States, insisting that the issue is being politicized and that the federal government is helping states get the supplies they need.

(CNN) -- Amid rising tensions with governors, President Donald Trump touted the number of coronavirus tests being conducted in the United States, insisting that the federal government is helping states get needed supplies and announcing that he is invoking the Defense Production Act to help with producing nasal swabs, a critical component for testing.

"Our testing is expanding very rapidly by millions and millions of people," Trump claimed Sunday night during the coronavirus task force briefing. It was unclear why the President cited that number since the US is only testing about 150,000 people daily.

A day after he lashed out at governors, the President said he was working very well with governors and played clips of New York Gov. Andrew Cuomo, a Democrat, praising aspects of the federal response. At the same time, Trump continued to contend that the federal government cannot be responsible for testing in each community.

"The governors wanted to have total control over the opening of their states. But now they want to have us, the federal government, do the testing," Trump said.

"Testing is local. You can't have it both ways. Testing is a local thing. It's very important. It's great. But it's a local thing. And we are going to get it done to a level in a very short period of time. All the swabs are coming in, all the necessary materials. A lot of them are already there, but a lot of people don't know that yet."

Addressing some of the concerns from governors in recent days about the lack of supplies needed to conduct the tests, he held up one of the nasal swabs that is being used in some tests and compared it to a Q-tip, while acknowledging that it is a more complex tool.

Last week, Trump said the administration is sending out more than 5 million nasal swabs, but he said Sunday some states "don't know where they are." The President said he is using the Defense Production Act to ramp up production of swabs, a critical component of the tests that has been in short supply in many states across the country.

"The swabs -- that's easy," Trump continued. "We have them coming in by the tens of millions." He said the nation will end up with so many swabs "you won't know what to do with them."

The administration is finalizing a deal with a company that is converting its plant to produce 10 million swabs per month and is using his powers under the Defense Production Act to force another company to match that production so the nation will have access to 20 million additional swabs per month.

Two people familiar with the decision told CNN that company is Puritan Medical Products, which is based in Maine. It is known for making "flocked swabs," which it says are better at collecting specimens than others.

Trump said the administration had experienced "difficulty" with the company, but did not elaborate further. Puritan did not immediately respond to CNN's request for comment.

Trump announced that Vice President Mike Pence will call the nation's governors Monday after several days of tension over who should be responsible for obtaining the critical components needed to conduct coronavirus tests, including nasal swabs, the viral transport medium need to carry the specimens and chemical reagent, which is used to help determine the diagnosis.

Last week, in what many viewed as an effort to shift the blame over concerns about inadequate testing, Trump tweeted "The States have to step up their testing!"

On Saturday, he lashed out at governors for "complaining," asserting that they were politicizing the testing issue in the same fashion as when they were calling for ventilators in recent weeks.

But even some Republican governors are disputing that notion, stating that it will be impossible to reopen private businesses -- as Trump wants to do by early May -- without expansive testing to know who is healthy and who is not.

On CNN's "State of the Union," Maryland Gov. Larry Hogan, a Republican, said the lack of testing is the number one problem in America and "has been since the beginning of the crisis."

"The administration, I think, is trying to ramp up testing. They are doing some things with respect to private labs," Hogan told CNN's Jake Tapper. "But to try and push this off to say that the governors have plenty of testing and they should just get to work on testing -- somehow we aren't doing our job -- is just absolutely false."

On NBC's "Meet the Press" Sunday, Ohio Gov. Mike DeWine, also a Republican, said he could probably double or even triple testing virtually overnight "if the FDA would prioritize companies that are putting a slightly different formula together for the extraction reagent kit."

"We have a shortage, worldwide shortage, of some of the materials that go into this," DeWine told NBC's Chuck Todd. "So, we really need help -- if anybody in the FDA is watching, this would really take our, take our capacity up, literally Chuck, overnight."

Cuomo warned on Sunday that if New York were to open businesses too quickly, the cases would accelerate again instead of that number going down.

"We apex, we plateaued, it's coming down the other side. That is good news," Cuomo said Sunday. "So we exhale, we can control the beast -- yes -- but the beast is still alive. We did not kill the beast. And the beast can rise up again."

Even when some businesses are allowed to reopen at an undetermined date in the future, he said state officials will be closely monitoring the infection and hospitalization rates.

If the infection begins to spread again, "you can go right back to where you were in one week's time," Cuomo said. "And if we went through all of this and lost all of these people and forced essential workers and hospital workers to do unbelievable tasks to get us through this crisis -- and we recreate the crisis, then shame on us."

On a day when the number of coronavirus deaths in the United States surpassed 40,000 people and after the number of people who have filed for unemployment hit 22 million, Trump defended his decision to play self-congratulatory clips during the briefing.

Asked by CNN's Jeremy Diamond whether it was the right time to tout the his response given the high number of deaths and the hardships that many jobless Americans are facing, Trump said he was merely "standing up for the men and women who have done such an incredible job."

"It's not about me. Nothing is about me. You are never going to treat me fairly, many of you, and I understand that," Trump said, berating reporters.

But just a few minutes earlier, Trump had, in fact, made the briefing about his leadership since the beginning of the pandemic.

Suggesting that other countries decided to "wing it" during the early onset of the coronavirus, Trump once again touted his decision on "banning people coming in from China" and later from parts of Europe, even though his order only applied to nationals from those countries and did not include, for example, Americans living or traveling in China.

Trump went on to praise Democratic governors who have complimented parts of the federal response, including Cuomo, Louisiana Gov. John Bel Edwards and California Gov. Gavin Newsom. He then played the clip of Cuomo describing how the President sent in the Army Corps of Engineers to build 2,500 beds at the Javits Center in New York.

"These were just extraordinary efforts and acts of mobilization, and the federal government stepped up and was a great partner," Cuomo said in the clip from his Sunday briefing.

"It was really a very nice thing that he said and people appreciate that," Trump said after complaining that his staff had not included a last clip that he wanted to play in the montage.

"I believe that the terms the governor used was phenomenal. 'You've done a phenomenal job—that was the term, that was the only sentence they left out (of the clips played during the briefing), which is okay, but I appreciate that that's what Gov. Cuomo said," Trump continued.

Trump said Sunday he was optimistic about the ongoing negotiations between Treasury Secretary Steven Mnuchin and Democratic congressional leaders to provide billions of additional dollars to small businesses to continue the Payroll Protection Program.

"We are also looking at helping our hospitals and our rural hospitals who have been hurt very badly," he said. "The rural hospitals for a long time have not been treated properly. We are looking to help them and beyond."