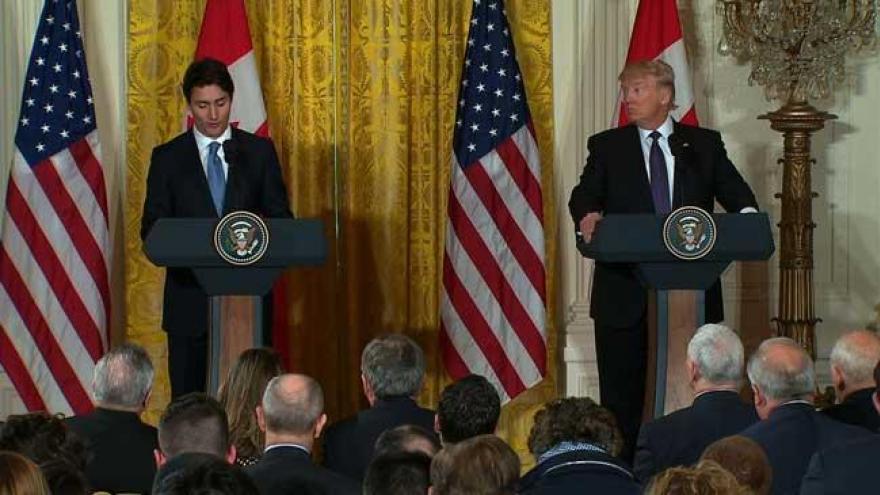 Trudeau, meanwhile, made clear that he holds a different view of the issue but said it was not his place to come to the US and "lecture" Trump on the controversial policy.

"I'm just doing what I said I would do," Trump said.

The moment came as the two leaders took questions from US and Canadian reporters and delicately sought to project the commonalities between their two countries, rather than put on display their ideological differences.

"There have been times where we have differed in our approaches and that has always been done firmly and respectfully," Trudeau said. "The last thing Canadians expect is for me to come down and lecture another country on how they choose to govern themselves."

Trudeau said he would focus on governing "in such a way that reflects Canadians' approach."

His comments came after Trump defended his action to ban citizens of seven Muslim-majority countries and put a stop to the entry of refugees into the US -- a ban that has been stalled by a federal court.

"We cannot let the wrong people in and I will not allow that to happen during this administration," Trump said. "We're going to give ourselves every bit of chance."

The two met for the first time Monday, with Trudeau as an ideological opposite who nonetheless hopes to avoid clashing with his new US counterpart.

In his previous US visits, Trudeau found a leader almost exactly aligned with his liberal worldview and youthful image. In return, then-President Barack Obama met with Trudeau often, counseling his younger ally on how to best advocate for the progressive agenda he championed.

Trudeau has arrived to a very different White House. He sought to balance the need to maintain close ties with a mandate from anxious Canadians to press Trump on his more controversial views.

The meeting is Trump's third official visit from a head of government at the White House. In his first three weeks in office, he's also welcomed the British and Japanese prime ministers, and will host Israeli leader Benjamin Netanyahu Wednesday.

Trump's previous bilateral sessions were marked by comity and a focus on shared priorities. But in Trudeau, Trump encountered a leader further apart from him in both age and global outlook than his previous two visitors.

Aides both in Washington and Ottawa insisted Trump and Trudeau sought to emphasize neighborly bonds during their first face-to-face meeting, but their stylistic approaches were on full view during the midday news conference.

Disputes between the US and Canada rarely veer into anything resembling combativeness, though disagreements do exist, including on the import of softwood lumber and, under Obama, the construction of the Keystone XL pipeline, which Canada supports (Trump took action early in his term to restart the process of building the oil pipeline).

Under Trump, however, the differences between the two countries could become more plain. Trudeau, a 45-year-old liberal, has made a point of actively welcoming refugees fleeing war in Syria, even visiting the Toronto airport in 2015 to greet a planeload of migrants.

When Trump signed his controversial executive order barring Syrian refugees entry into the country, Trudeau wrote a pointed message on Twitter: "To those fleeing persecution, terror & war, Canadians will welcome you, regardless of your faith. Diversity is our strength. #WelcomeToCanada."

The message was accompanied by a photo of the Prime Minister greeting a young girl during his 2015 visit to the airport.

Even then, though, Trudeau refused to actively criticize the immigration order, which is currently mired in legal challenges and, for now, on hold.

He said Friday he planned to discuss "all sorts of things that we align on" with Trump, but would also confront areas of disagreement "in a respectful way,"

Refugee policy isn't the only divide between Trudeau and Trump. The leaders have expressed vastly differing views on climate change and economic policy as well.

Trump has vowed to renegotiate the North American Free Trade Agreement between Mexico, the US, and Canada, though detailed talks about what's to be included in a new accord weren't expected to be hashed out Monday.