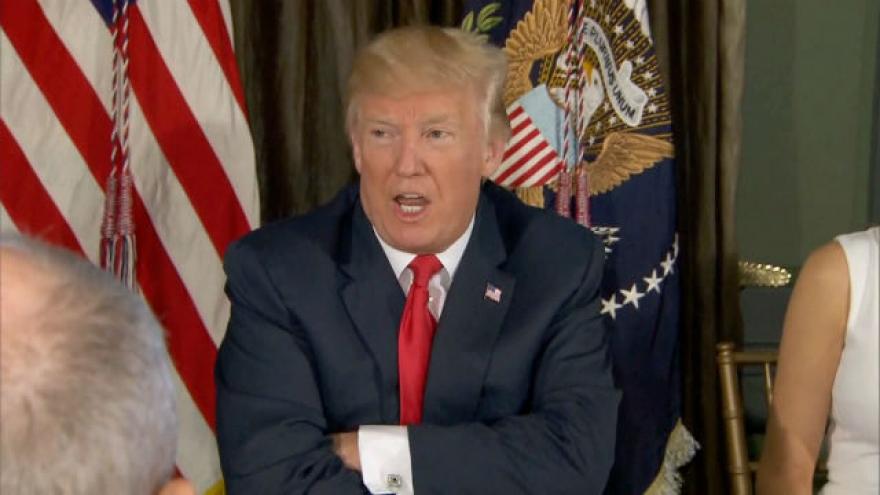 President Donald Trump warned that North Korea would \"face fire and fury like the world has never seen before.\" Photo courtesy POOL

(CNN) -- US President Donald Trump has reiterated his bellicose warning to North Korea, suggesting that his threat to unleash "fire and fury" may not have gone far enough.

"Maybe it wasn't tough enough," Trump said during a lengthy exchange with reporters Thursday at his golf club in Bedminster, New Jersey.

Trump said past administrations had not done enough to take on North Korea and that it is time a President "stuck up for the country."

At the center of the geopolitical storm is the tiny island of Guam, a US territory in the Pacific Ocean.

It's home to a US Navy base and the Andersen Air Force Base, from which American B-1B bombers conducted sorties over the Korean peninsula Tuesday, provoking the ire of Pyongyang's leadership and an escalating war of words between the US and North Korea.

On Thursday, North Korean state media KCNA said military leaders were working on a proposal to launch four intermediate-range Hwasong-12 missiles into the sea less than 25 miles off Guam's coast.

"It's a 14-minute flight time if all the factors are successful and if it gets through all the US defense layers in place," Charfauros told CNN. North Korea had previously said the flight time would be 1,065 seconds, or just under 18 minutes.

On Thursday, Trump replied to North Korea's threat to hit Guam with a threat of his own.

"Let's see what he does with Guam," Trump said in apparent reference to Kim. "He does something in Guam, it will be an event the likes of which nobody has seen before."

Two of the US' regional allies, South Korea and Japan, are taking steps to counter a potential escalation of tensions between Pyongyang and Washington.

Japan's new defense minister, Itsunori Onodera, said Thursday that Japan would "take the necessary measures," to defend itself from any strike.

Japan is in possession of US-supplied missile shield technology, including Patriot PAC-3 batteries, but these would likely need to be redeployed to have any chance of shooting down North Korean missiles.

KCNA said that its missiles would fly over three prefectures of Japan -- Hiroshima, Kochi and Shimane -- part of a corridor across Japan that does not have PAC launchers in place. The Japanese Defense Ministry told CNN no PAC-3 batteries were being deployed to those areas.

In any case, the effective range of the Patriots is very limited, Bruce Bennett, a senior defense analyst at the Rand Corporation, told CNN.

"If North Korea launches where they launched the intercontinental ballistic missile (ICBM) on July 28, (Japan) won't be able to reach that far with the Patriot," Bennett said.

South Korean presidential spokesman Park Soo-hyun told journalists Friday the country's top national security adviser, Chung Eui-yong, had spoken with his US counterpart, H.R. McMaster, with the North Korean threat at the top of the agenda.

"The two sides reaffirmed their promise to closely and transparently work together on the step-by-step moves that they will take in order to ensure the security of both South Korea and the United States, as well as the safety of the people," Park said.

Ahead of Trump's latest comments, North Korean officials said that the US "would suffer a shameful defeat and final doom" if it "persists in extreme military adventure, sanctions and pressure," according to a statement on KCNA.

The statement goes on to say that the officials "vowed to mercilessly wipe out the provocateurs making desperate efforts to stifle" North Korea.

In off-the-cuff remarks on Tuesday, Trump said: "(Kim) has been very threatening beyond a normal state," Trump said. "They will be met with fire, fury and frankly power the likes of which this world has never seen before."

In the wide-ranging exchanges with reporters, Trump said the US will "always consider negotiations" with North Korea.

Speaking to reporters in California on Thursday, Defense Secretary James Mattis declined to discuss in detail the US military's readiness.

"I don't tell the enemy in advance what I'm going to do," Mattis said. "Our readiness, we are ready."

Mattis said he recognized his responsibility to have military options available for the President, but said the current "diplomatically led" strategy has "diplomatic traction."

"I want to stay right there," Mattis said. "Right now, the tragedy of war is well enough known it doesn't need another characterization beyond the fact that it would be catastrophic."

Analysts say that the escalation is unhelpful to resolving the increasingly tense situation in the Pacific.

"We're seeing a bit of response that we haven't seen before," says CNN military analyst Rick Francona. "What people are calling a threat to Guam, where they detailed the flight path, the flight time, the range, we've never really seen anything like this before... I think it rattled (the US administration) a little bit and caused them to (react) to this."

However, he says while the rhetoric from both leaders continues, "I don't think we're edging to an actual confrontation yet."

The President also sought to reassure Americans of their own safety on Thursday, even as he issued another stark warning to North Korea.