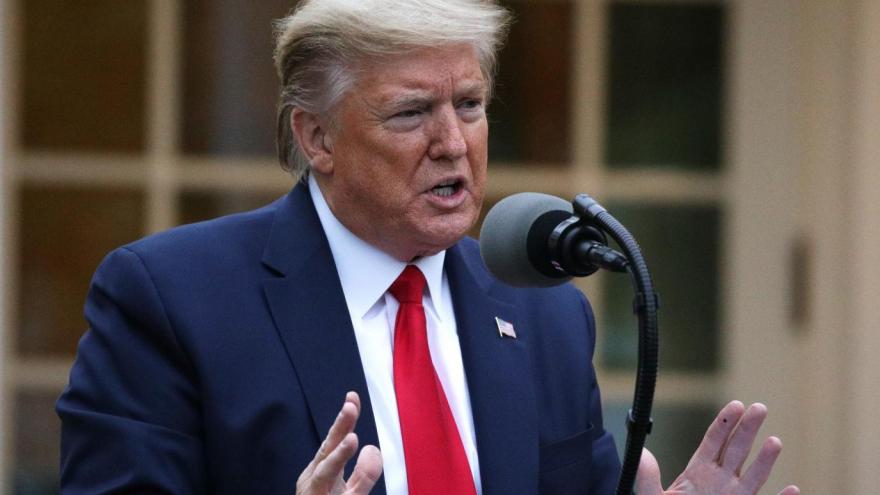 President Donald Trump tweeted that he has instructed the US Navy to "shoot down and destroy any and all Iranian gunboats" that harass US ships.

(CNN) -- President Donald Trump tweeted Wednesday that he has instructed the US Navy to "shoot down and destroy any and all Iranian gunboats" that harass US ships.

"I have instructed the United States Navy to shoot down and destroy any and all Iranian gunboats if they harass our ships at sea," Trump wrote.

It's unclear if Trump's tweet amounts to a standing order, and whether Central Command, which oversees operations in the Middle East, would fire upon an Iranian boat. Such an order would further raise the possibility of a miscalculation between the two longtime foes, which nearly went to war earlier this year after the US killed a top Iranian military commander.

Regardless of the practical effect of Trump's tweet, it's the latest provocative threat he has levied against Iran, and it comes amid scrutiny of his handling of the ongoing coronavirus pandemic.

CNN has reached out to the Pentagon and White House for additional comment.

Last week, the US Navy released video that it says shows Iranian naval vessels repeatedly conducting "dangerous and harassing approaches" toward US Navy warships in the North Arabian Sea and claimed that one Iranian vessel came within 10 yards of colliding with a US ship.

The video of the incident appears to show multiple Iranian-flagged vessels, with men manning guns at the front of those ships, passing in front of a US naval vessel. The guns do not appear to be pointed at the ship, which sounded a horn multiple times as the Iranian vessels approached.

On Sunday, Iran's Islamic Revolution Guard Corps acknowledged that an incident took place, but dismissed the US version of events as a "fake Hollywood tale," in a statement published by the Iranian News Agency.

Roughly a half hour before Trump tweeted Wednesday, "Fox & Friends," which Trump regularly watches, aired a segment about the incident, as well as a report on Iran launching its first military satellite into orbit. Iran's Islamic Revolutionary Guard Corps said the launch was successful, though CNN has not been able to independently verify that.

Trump's tweet doesn't necessarily mean a prompt change in policy. In 2017, he tweeted a directive to place a ban on transgender service members. The announcement blindsided military officials and led Gen. Joseph Dunford, then the chairman of the Joint Chiefs of Staff, to inform service members that there would be no immediate modifications to current policy. After a review and several legal challenges, the ban went into effect last year.

Trump has repeatedly taken a hardline stance against Iran and issued bellicose threats against the nation. Tensions between the two countries sharply escalated in January when the US killed Iran's second most powerful official, Gen. Qasem Soleimani, and earlier this month, Trump, without citing any evidence, claimed that his administration had information that "Iran or its proxies are planning a sneak attack on US troops and/or assets in Iraq." He warned of a "heavy price" to pay if such acts were carried out.

This story has been updated to include additional background information.