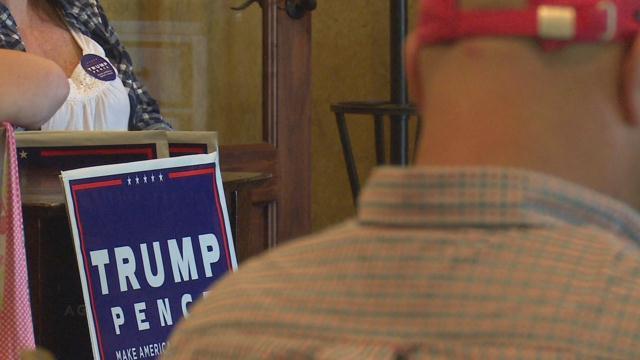 The chairman and vice chair of the Trump-Pence Indiana Campaign team visited Granger and Goshen Monday to encourage early voting.

“This is really a movement!” Trump-Pence Indiana Campaign Chairman Rex Early said. “I never have seen the enthusiasm as it is today.”

The Trump-Pence campaign for president calls it a movement, and it came through Granger Monday afternoon, where some voters said the movement is spreading.

“I noticed one of [my] neighbors, that I know for a fact that they’re in the Democrat line, now they have Trump signs out in front of their yard,” Trump supporter and Granger resident Jason Holland said. “I wasn’t part of that, but I’m glad to see that!”

Nearly 40 Michiana Trump supporters gathered at Villa Macri restaurant in Granger Monday afternoon to hear from the chairman and vice chair of the Indiana campaign, as they traveled throughout northern Indiana.

“I am absolutely positive that Trump’s gonna win this; gonna be the next president of the United States,” Early said.

Yard signs were handed out and volunteer forms were signed at the event, as the final stretch to the general election begins.

And on the minds of several people at the event? Governor Pence’s Tuesday night debate with Democratic VP nominee Senator Tim Kaine.

“Mike Pence will be a good debater,” Early said.

“I hope he just speaks out a little bit more,” Holland said. “I know he can be kind of hesitant and not as outspoken as he should be, but I think he’ll do fine.”

Governor Pence is considered to be a quieter conservative who helps balance the ticket he shares with his running mate.

And despite Trump’s controversial comments throughout the campaign, his supporters said it’s still part of his appeal.

“I might’ve, a couple times, said, ‘I wish he hadn’t said that word,’” Early said, laughing. “But, you know, here’s a guy that’s never been in the political arena, and you know, he says what he feels. That’s why people like him!”

“No one’s perfect,” Holland said. “So, for people to say his rhetoric – I think Donald Trump has fought very hard in his life to get where he’s at, and I think that’s what I see.”

The owner of Villa Macri, who said he is neutral when it comes to politics, said his business has hosted Republican and Democratic events.