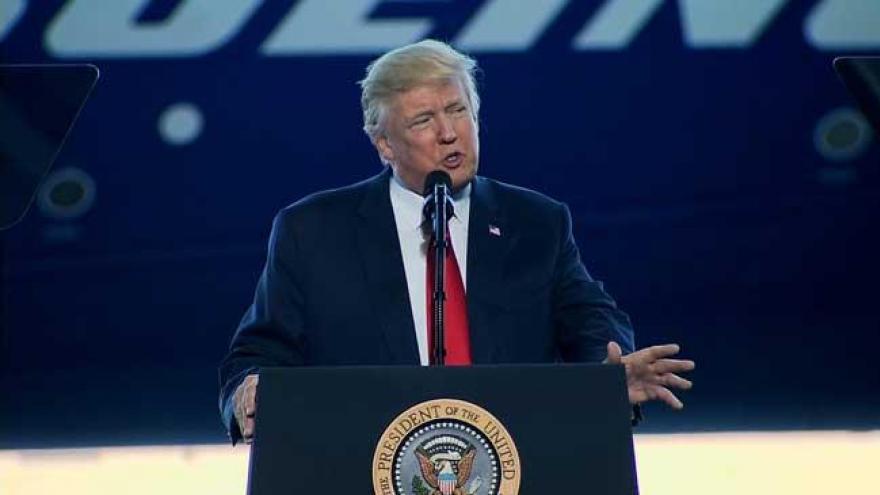 NORTH CHARLESTON, South Carolina (CNN) -- President Donald Trump credited his young presidency Friday with creating a business climate that is incentivizing American companies to keep their businesses in the US and invest in American manufacturing.

"Already, American industry is roaring back," Trump said at a Boeing factory here during a ceremony unveiling the US aerospace company's newest jet. "Jobs is one of the primary reasons I am standing here today as your President and I will never, ever disappoint you, believe me."

Trump touted announcements from several companies announcing expanded operations in the US or new manufacturing plants -- including some originally announced before he took office -- and promised more of the same as he tackles his agenda of lowering taxes, stripping government regulations and implementing protectionist trade measures to incentivize US manufacturing.

It was a scripted and issue-focused version of the combative defense of his presidency he served up during a nearly 80-minute long news conference a day earlier at the White House.

And it marked a return to jobs-oriented rhetoric he offered during his populist campaign for president, including here in South Carolina, where his victory in the Republican primaries sent shockwaves through the political establishment.

After remarking on that primary victory -- calling it "a place that was going to be tough to win and we won it" -- Trump slipped into the "America First" theme that defined his campaign and he has pledged will define his administration.

He promised to "bring jobs back to America" by touting his plans to "lower taxes on American business," but also warned companies seeking to outsource their manufacturing operations that they would be penalized, drawing on his proposals to tax some imported products manufactured abroad.

"It has to be much easier to manufacture in our country and much harder to leave. I don't want companies leaving our country, making our product, selling it back -- no tax, no nothing," Trump said. "There will be a very substantial penalty to be paid when they fire their people and move to another country."

Trump also vowed to "very strongly enforce our trade rules and stop foreign cheating," though he has not yet taken steps to label countries he decried during the campaign -- such as China -- as currency manipulators, which he could do by executive action. Trump has also floated imposing a tariff on imports from countries where he believes the US is at a trade disadvantage, though he did not specifically address those plans on Friday.

But as he touted some of the successes of his administration -- including several car companies having pledged to expand US manufacturing operations -- he pointed to some corporate investments that had been announced long before he became president. One of the examples he cited was Intel's recent announcement it would create a new plant in Arizona, a plan it had announced years earlier under the Obama administration but had not implemented.

Speaking at the Boeing factory, where he parked his Boeing-made Air Force One alongside the company's newly unveiled 787-10 jet, Trump also addressed his ongoing negotiations with the airplane manufacturer concerning a new fleet of Air Force One jets and potential orders of new combat jets. Trump has met several times with Boeing's executives as he's tried to negotiate down the price of those orders.

"We are looking seriously at a big order," Trump said of Boeing's F-18 Super Hornet. "The problem is that (Boeing CEO) Dennis (Muilenburg) is a very tough negotiator. But I think we may get it."

Trump toured the new "Dreamliner" after the speech, but not before offering up a goodbye to the crowd of supporters and Boeing employees.