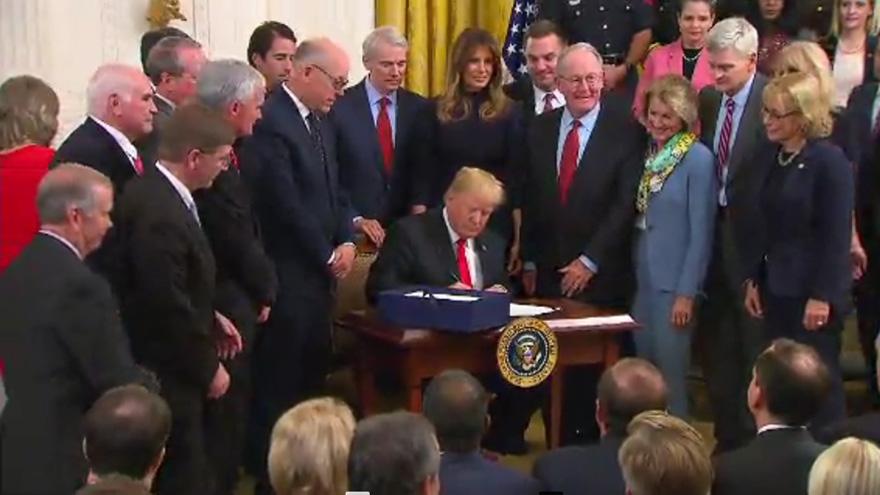 (CNN) -- President Donald Trump signed sweeping opioids legislation into law at the White House on Wednesday afternoon during an event marking "a year of action" by the administration to combat the opioid epidemic.

The bill signed includes provisions aimed at promoting research to find new drugs for pain management that will not be addictive. It also expands access to treatment for substance use disorders for Medicaid patients.

The emergency declaration last yearset priorities in tackling the epidemic and has directed funds from the US Department of Health and Human Services to carry out that mission. Congress has allotted more than $8 billion this year for the opioid crisis. But some experts say that isn't nearly enough and that tens of billions of dollars is needed to back any such effort to combat the crisis.

New preliminary data published Tuesday from the National Center for Health Statistics showed overdose deaths nationwide, while still exceedingly high, declined in the months leading up to March 2018, the most recent month for which data was reported.

In August, Trump also urged Attorney General Jeff Sessions to sue certain pharmaceutical companies that have contributed to the opioid crisis in the United States.

The first lady has included the opioid epidemic as one part of her three-pronged Be Best program of helping kids, specifically focused on neonatal abstinence syndrome. Included in the sweeping legislation signed is "Tyler's Law," an opioid-fighting assistance program.

"Be Best will continue to shine a light on successful programs like MATER that demonstrate positive results for children. Over the past year, I have traveled both nationally and internationally -- learning about many of the programs offered through private organizations, schools and hospitals, which are meant to help children and families as they deal with drug addiction," Melania Trump said at Wednesday's event. "What I consistently hear is the need for support at all levels."