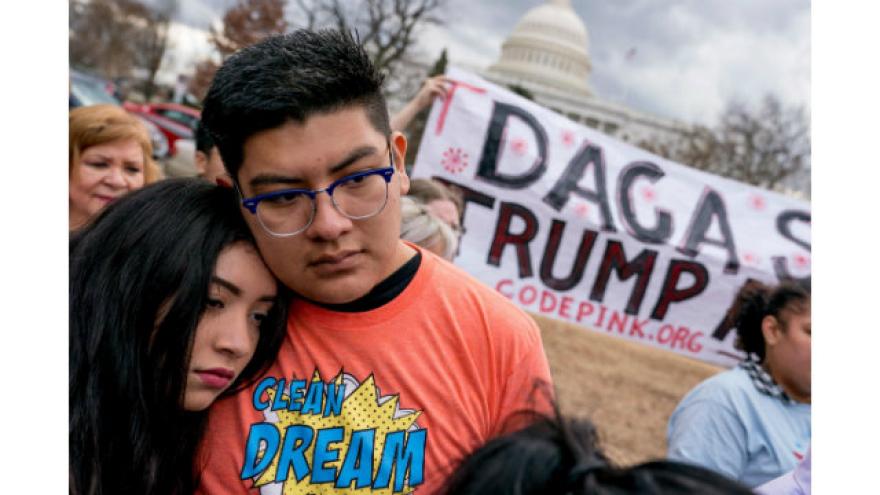 After nearly a year of threats, the Trump administration will take its most aggressive step to date against a familiar target of its ire: California and its immigration policies. Photo courtesy Andrew Harkin/AP

By Tal Kopan and Laura Jarrett

(CNN) -- After nearly a year of threats, the Trump administration made its most aggressive move to date against a familiar target of its ire: California and its immigration policies.

Late Tuesday evening the department filed a federal lawsuit against the state and its top officials to stop a cluster of so-called "sanctuary state" bills -- a move that puts the administration on offense but is nonetheless likely to generate heated litigation over the boundaries of immigration authority.

The lawsuit is the latest broadside from the Trump administration against so-called "sanctuary cities" -- a broad term referring to localities that abide by some measure of non-cooperation with federal law enforcement -- and amid an already heightened level of tension with California.

Attorney General Jeff Sessions is expected to announce the case on Wednesday in California's capital, Sacramento, during an event with a state law enforcement association.

"The Department of Justice and the Trump administration are going to fight these unjust, unfair, and unconstitutional policies that have been imposed on you," Sessions will tell law enforcement officers at the California Peace Officers Association gathering on Wednesday, according to a copy of his prepared remarks. "We are fighting to make your jobs safer and to help you reduce crime in America. And I believe that we are going to win."

California Governor Edmund G. Brown and Attorney General Xavier Becerra, both named defendants in the lawsuit, sharply condemned it as a meritless.

"At a time of unprecedented political turmoil, Jeff Sessions has come to California to further divide and polarize America," Brown said in a statement. "Jeff, these political stunts may be the norm in Washington, but they don't work here. SAD!!!"

"No matter what happens in Washington, #California will stay the course and enforce all our laws and protect all our people," Becerra tweeted.

The California laws at issue limit state and local police cooperation with federal immigration authorities in a variety of ways. One prohibits private employers from voluntarily cooperating with federal immigration law enforcement and requires that employers give workers a heads up about potential worksite inspections, a second restricts local law enforcement from sharing information about the release of criminal immigrants to federal agents and prohibits their transfer to federal custody, and a third allows the state to inspect federal and Department of Homeland Security documents, which DOJ considers off limits to local authorities.

"The provisions of state law at issue have the purpose and effect of making it more difficult for federal immigration officers to carry out their responsibilities in California," Justice Department lawyers argue in the suit, further calling the laws an "obstacle to the United States' enforcement of the immigration laws and discriminating against federal immigration enforcement."

The suit will test how much leeway states have to shield immigrants from detection.

The Justice Department says that the federal power to determine immigration policy is well settled and California's laws conflict with those federal prerogatives in novel ways.

But the legal thrust of the case also puts the Trump administration in the delicate position of relying on a 2012 Supreme Court decision that effectively blocked some of Arizona's sweeping attempts aimed at lessening the number of undocumented immigrants on the grounds that the state could not pursue policies that undermined federal law -- known as "preemption."

The justices delivered a split decision, however, and declined to block the most hotly debated provision, requiring state police officers to demand the papers of anyone suspected of being in the country illegally.

In addition to the ongoing litigation over sanctuary cities, the mayor of Oakland, California, recently drew sharp rebuke from federal officials when she announced in advance that Immigration and Customs Enforcement were preparing to hold enforcement operations in her city, which officials said allowed some priority targets to evade capture.

States and cities say their policies are protecting the best interest of their citizens. States say they should not have to spend their limited resources on a federal responsibility and a perception the local law enforcement works with immigration officials hurts community relations.

The Justice Department has struggled in federal courts to pressure localities on sanctuary policies. Federal courts have blocked the Trump administration from taking away funds on grounds that jurisdictions don't cooperate on immigration enforcement, aside from a small piece of federal law that requires local authorities to share information on an individual's citizenship and nationality "status."