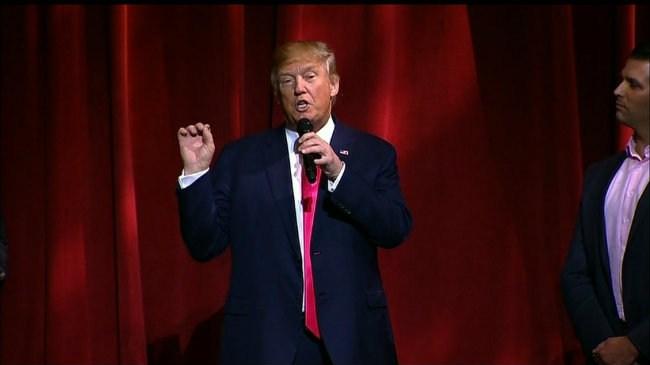 WASHINGTON (CNN) -- Donald Trump suggested Wednesday that he would allow exceptions to let some undocumented immigrants to stay in the US, vowing he wouldn't grant them citizenship but telling Fox News, "there's no amnesty, but we work with them."

For Trump, whose rise to the Republican nomination was based in large part on his hardline immigration policies, the comments are the clearest sign yet that he is reconsidering his pledge to deport all of the estimated 11 million undocumented immigrants in the US, a key part of his campaign platform.

He continued: "Now, everybody agrees we get the bad ones out. But when I go through and I meet thousands and thousands of people on this subject -- and I've had very strong people come up to me, really great, great people come up to me -- and they've said, 'Mr. Trump, I love you, but to take a person who's been here for 15 or 20 years and throw them and their family out, it's so tough, Mr. Trump,' I have it all the time. It's a very, very hard thing."

The remarks were released ahead of the second part of the interview with Hannity, which is scheduled to air Wednesday evening.

At the same event, Trump also indicated an openness to "softening" his immigration policies, which also includes building a wall on the border with Mexico.

Trump all week has made rumblings about a position change, and he had previously planned to deliver an immigration speech this week in Colorado. But the address was postponed as he and his advisers indicated that his positions on key tenants of immigration policy were not settled.

"Hillary Clinton only talks about the separation of families who chose to come here illegally," Trump said. "I want to focus on the American families who've been permanently separated from their children because of the sanctuary cities and open borders that Hillary Clinton supports."

Trump's apparent suggestion to offer some undocumented immigrants a form of legal status resembles positions offered by other Republicans during the primary fight -- stances Trump cited to vanquish his opponents.

Here's how Florida Sen. Marco Rubio campaigned in November in South Carolina: "We will enforce our immigration laws. That being said, I don't think it's reasonable to say you're going to round up and deport 11 million people. And I think people are going to be reasonable and responsible about what do you do with someone who has been in this country for 10 years who otherwise has not violate the law, has learned English, paying taxes, paid a fine and wants a work permit."

"You come out from the shadows. You receive a provisional work permit. You pay taxes. You don't receive federal government assistance. You learn English," he said. "You earn legal status, not citizenship. That, to me, is the most practical way of dealing with this problem."

Kristy Campbell, a spokeswoman for Bush, said in a statement Wednesday it was "unsurprising that Donald Trump is finally faced with reconciling his immigration policy with reality, something Governor Bush predicted last year."