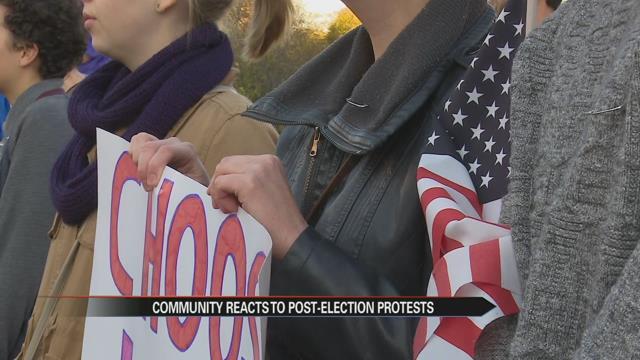 There have been anti-trump protests happening across the nation since the election. Sunday, ABC 57’s Jess Arnold found out what Trump supporters think of all the demonstrations.

“I think everybody has the right to protests, and people should exercise their rights, but at the same time it does undermine our democracy,” said Trump supporter, Billy Anderson.

“What concerns me the most with them is the chance to say this idea ‘not my president,’ because I think that’s detrimental to the process,” said Notre Dame student and Trump supporter, Louis Bertolotti.

And after an already divisive election season, some people think these protests are exacerbating the problem.

“The protests are just driving a bigger nail, a bigger wedge between what we should be and what we could be,” said Notre Dame student and Trump supporter, Patrick Crane.

But many protestors believe what they call Trump’s ‘angry rhetoric’ could be disastrous for America.

“I think that there’s a lot of anger in this country, and Mr. Trump was able to tap into those fears, because he represented hope that a government would be responsive to his people,” said Louis Bertolotti.

And these Trump supporters believe he will be responsive. America just has to let him try.

“I think they should give him a chance, honestly. They should just give Mr. Trump a chance to be the president and see what happens,” said Anderson.

They say at this point, protesting won’t change a thing.

“Whether you like him, you love him, you hate him, Donald Trump will be the next president of the United States of America, so the best thing that we can do in my opinion is unite behind him,” said Bertolotti.

And that’s one thing both Trump and Clinton supporters seem to agree on—that Americans have to unite.