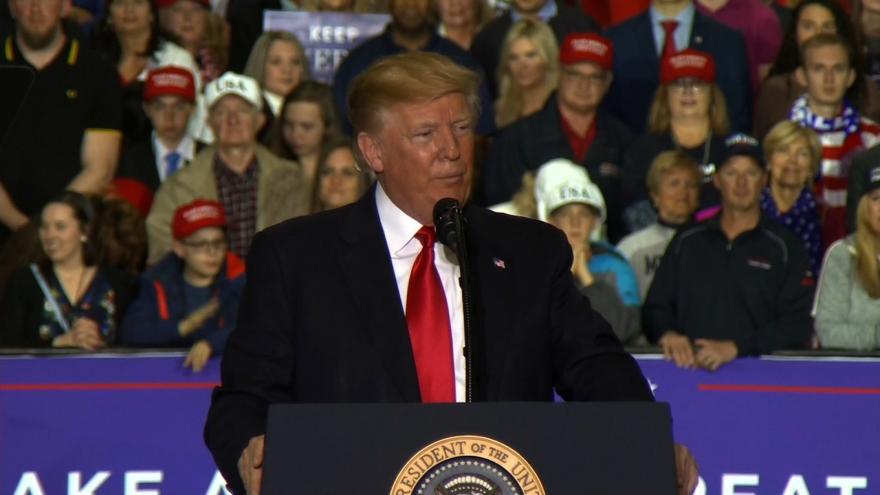 (CNN) -- President Donald Trump took a post-rally victory lap Sunday morning on his favorite social media platform, Twitter, but not without also taking a dig at a favorite target, the media, and its annual dinner celebration in Washington.

"Great evening last night in Washington, Michigan," Trump tweeted. "The enthusiasm, knowledge and love in that room was unreal. To the many thousands of people who couldn't get in, I cherish you....and will be back!"

"While Washington, Michigan, was a big success, Washington, D.C., just didn't work," wrote Trump, who continued his break with tradition in not attending the media confab. "Everyone is talking about the fact that the White House Correspondents Dinner was a very big, boring bust...the so-called comedian really "bombed."

Trump's continued counterprogramming move comes just hours after he touched down in Washington, DC, following a campaign rally in Washington Township, Michigan, Saturday night, where he gave a characteristically freewheeling speech that harped on familiar themes, such as the need to fund his proposed border wall and defense spending, and slammed familiar targets, including Democrats such as Sens. Jon Tester of Montana and Debbie Stabenow of Michigan, who are running for re-election this year.

Trump went after Tester for raising concerns about the President's former nominee for secretary of veterans affairs, White House physician Ronny Jackson, who withdrew his nomination last week after a series of allegations surfaced, including that he loosely handled prescription drugs and was periodically intoxicated. Jackson has denied the allegations.

Trump also broke some news, threatening to shut down the government in the fall over funding for border security and saying a US-North Korea meeting to discuss the denuclearization of the Korean Peninsula would take place "over the next three or four weeks."

But even Trump's decision to skip the White House Correspondents' Association Dinner on Saturday night was familiar territory. In April 2017, Trump held a rally in Pennsylvania instead of attending the dinner.

Comedian Michelle Wolf, best known for her contributions on "The Daily Show," headlined the event, unleashing a biting and raunchy routine that mocked lawmakers and members of the media, but focused especially on Trump and others from the White House in a set that drew harsh critiques from many in the audience and online.

Typically at the dinner, the hosting entertainer roasts the President and the administration, and the President returns the gesture. Trump attended the dinner in 2011, where President Barack Obama and comedian Seth Meyers famously mocked him.

The dinner also features the presentation of journalism awards. This year, journalists from CNN, The New York Times, Reuters, and The Washington Post received various awards for journalistic excellence, news coverage on deadline, and excellence in coverage of subjects of significant national or local importance.