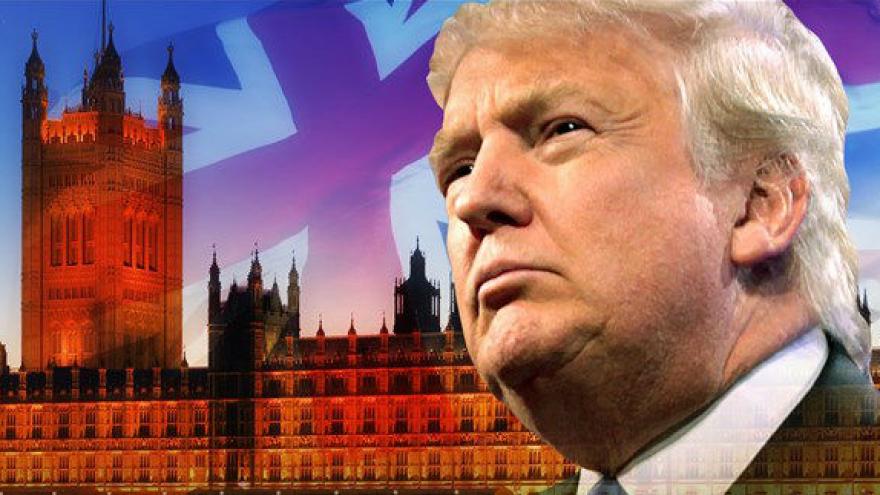 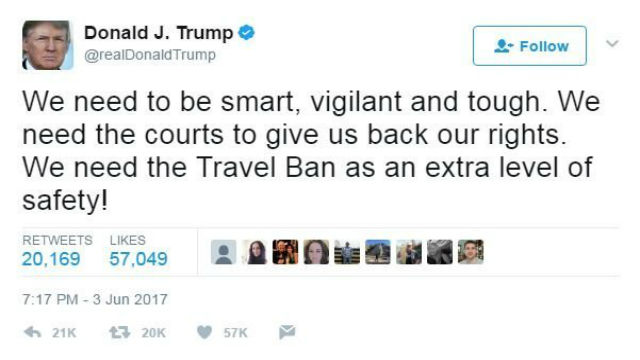 Without referring explicitly to London, Trump wrote on his personal account: "We need to be smart, vigilant and tough. We need the courts to give us back our rights. We need the Travel Ban as an extra level of safety!"

Eight minutes later, he tweeted, "Whatever the United States can do to help out in London and the U. K., we will be there - WE ARE WITH YOU. GOD BLESS!"

"We need to be outraged when the president exploits a terrible violent crime to push his discriminatory and illegal policy," she tweeted.

And Kentucky Secretary of State Alison Grimes, a Democrat, said Trump was stoking "fear and hate" with his response.

"Our Commander in Chief should be directing support to a vital US ally, not using horrendous attack to stoke fear & hate," she tweeted.

Earlier, Trump retweeted the Drudge Report when it referred to "fears of a new terror attack," although the nature of the incidents had not yet been confirmed by authorities. Shortly after Trump tweeted, British Prime Minister Theresa May said the incident was being treated as a "potential act of terrorism" and London police later tweeted that they were "declared as terrorist incidents."

White House press secretary Sean Spicer said Trump had been briefed on the situation by his national security team. A spokesman for Vice President Mike Pence said he also has been briefed and spoke with Trump from Air Force Two.

Pence also tweeted, "Our thoughts & prayers are w/ the victims, courageous first responders & all the people of London. As President Trump said: WE ARE WITH YOU."

A van mowed down pedestrians as it sped down London Bridge in the British capital Saturday night, leaving bodies lying in the roadway, a witness to the incident told CNN.

Also Saturday, a man with a "massive knife" entered a restaurant at Borough Market, just south of the bridge, and stabbed two people inside, a witness told CNN.

Trump's travel ban -- which, among other things, would temporarily block entry into the US from six Muslim-majority countries -- has been blocked by a number of federal court decisions. On Thursday, the Trump administration asked the Supreme Court to allow the ban to go into the effect while the court considers its legality.

CNN's Elizabeth Landers and Jennifer Hansler contributed to this report.