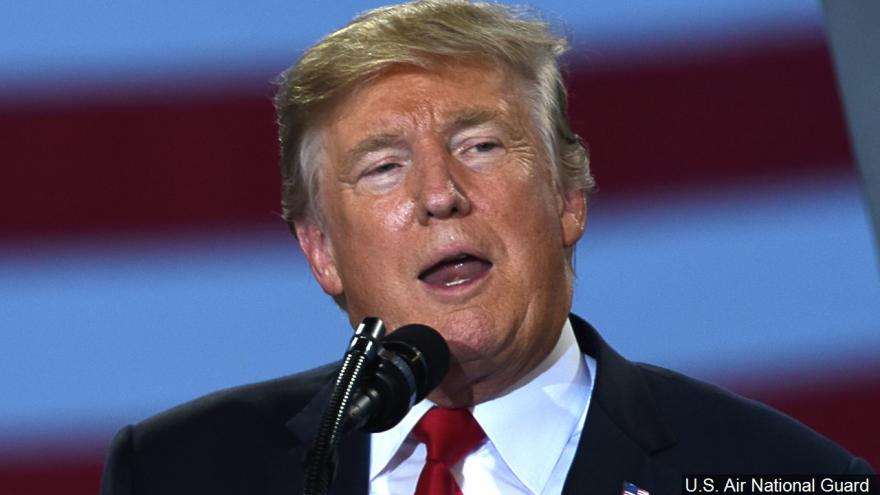 (CNN) -- Waking in Asia at the start of his marathon diplomatic tour, President Donald Trump confronted another mass shooting back home, a tragedy that's likely to overshadow his forceful calls for cooperation on North Korea and better trade terms with Asian nations.

Trump addressed the shooting during morning remarks to business leaders at the American embassy in Tokyo, calling the massacre inside a Texas church an "act of evil."

But the gun attack didn't appear likely to alter his schedule of events, which includes a midday news conference at the neo-Baroque Akasaka Palace in central Tokyo.

A day after a series of social outings with his Japanese counterpart, Trump was getting down to business Monday during high-stakes security and trade talks.

He was due at Tokyo's Imperial Palace for a greeting with Japan's 83-year-old Emperor Akihito before settling down for meetings and lunch with Prime Minister Shinzo Abe, who has become Trump's closest partner in Asia as he confronts an increasingly hostile North Korea.

The two men spent much of Sunday at informal engagements in and around Tokyo, lunching on hamburgers at an exclusive country club before playing nine holes of golf. In the evening they were joined by their wives for dinner at a high-end eatery in the Ginza district.

In his public appearances so far, Trump has sought to cast himself as a highly successful chief executive, touting the US economy while taking credit for a streak of hiring by American companies.

It was an attempt to challenge the notion that he arrived in Asia politically weakened by the series of investigations into his campaign's ties to Russia back home. Two of the leaders he'll meet this week -- Abe and Chinese President Xi Jinping -- are emboldened after key political victories over the past weeks.

Aboard Air Force One as he flew toward Tokyo, Trump was asked whether he was concerned about Xi's newfound political muscle. He insisted he was flying to Asia similarly emboldened.

"Excuse me, so am I," Trump said, before listing off a surging stock market and low employment numbers as evidence of his political prowess.

During remarks to business leaders at the American embassy here on Monday morning, Trump adopted an assertive stance toward the US trade relationship with Japan, one of the chief disputes in an otherwise chummy relationship with Abe.

"Right now, our trade with Japan is not fair and it's not open," he said.

One of Trump's first acts as President was withdrawing the US from the Trans-Pacific Partnership, the massive pact negotiated by the Obama administration that included Japan and several other Asian nations. Abe criticized the decision.

Delivering remarks to a small group of top US and Japanese business leaders, Trump stressed the importance of renegotiating the terms of the trading relationship, which the US President slammed as lopsided.

But he also expressed optimism that those negotiations would help rebalance the relationship.

"We've started the process and it's gone on for a long time, but I know that we will be able to come up with trade deals and trade concepts that will be fair to both countries and actually will be better for both countries," Trump said.

Trade, along with North Korea, are expected to dominate Trump's talks in Asia. He departs Tokyo Tuesday morning for Seoul, before heading to China, Vietnam and the Philippines.

Trump will seek to highlight the brutality of the regime in Pyongyang on Monday when he meets with family members of Japanese who were kidnapped by North Korea decades ago. Some of the family members believe their relatives may still be alive.

White House officials say Trump wants to highlight the human rights offenses committed by North Korea, which they say are often overshadowed by the country's missile and nuclear weapons programs.