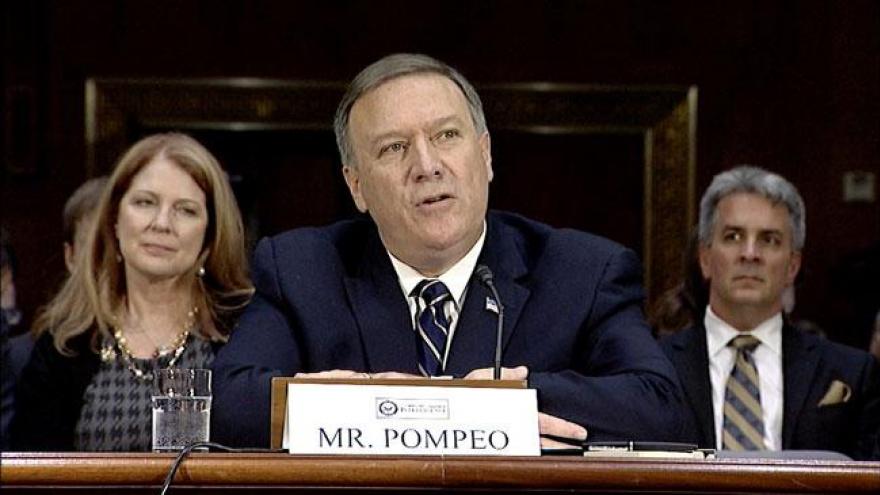 (CNN) -- Rep. Mike Pompeo, Donald Trump's pick for CIA director, promised Thursday at his Senate confirmation hearing to deliver unvarnished facts to the President and pledged to shield the agency from political influence at a time when Trump has been critical of the intelligence community.

Like other nominees this week, the Kansas Republican disagreed with the President-elect in tone and substance on several occasions. He vowed not to reinstate enhanced interrogation techniques -- even if ordered to do so by Trump -- and took a harder line on Russia than Trump has displayed.

Pompeo opened the hearing with criticism of Moscow even as the President-elect has suggested that the intelligence community's findings of Russian meddling in last year's election were overblown.

Pompeo told the Senate Select Committee on Intelligence that he embraced those findings as spelled out in a comprehensive report of the intelligence community on the Russian breaches compiled earlier this month.

"With respect to this report in particular, it's pretty clear about what took place here, about Russian involvement in efforts to hack information and to have an impact on American democracy," he said in response to questioning. "This was an aggressive action taken by senior leadership inside of Russia."

He added that Russia would view the debate it has sparked in the US as something that would be "to their benefit."

In his opening remarks, Pompeo listed Russia as well as China as "sophisticated adversaries" in the cyber realm, saying "hackers are all taking advantage of this new borderless environment" and "the CIA must continue to be at the forefront of this issue."

In other criticism of Russia, he said the country has "reasserted itself aggressively, invading and occupying Ukraine, threatening Europe, and doing nothing to aid in the destruction and defeat of ISIS."

His words were more aggressive toward Moscow than Trump's have been, continuing a theme evident throughout the confirmation hearings this week in which the President-elect's nominees have seemed more wary of the traditional American foe than their would-be boss.

Pompeo pledged that the the CIA would provide policymakers with "accurate, timely, robust and clear-eyed analysis of Russian activities."

Along with Russia, Pompeo said other global threats include Iran's growing influence in the Middle East, ISIS's grip over major urban areas and the conflict in Syria.

"This is the most complicated threat environment the United States has seen in recent memory," he said.

The hearing moved Thursday afternoon to a closed session.

Along with the hot-button issue of Russian hacking, Pompeo confronted a number of other controversial topics, chief among them the issue of torture.

When questioned Thursday, Pompeo said he would not restart the CIA's use of enhanced interrogation techniques if he is approved for the position.

Democratic Sen. Dianne Feinstein asked, if ordered by President-elect Trump, whether he would restart the CIA's use of enhanced interrogation tactics the that fall outside of the Army Field Manual.

"Absolutely not," Pompeo responded. "Moreover, I can't imagine I would be asked that by the President-elect."

Later in the hearing, Pompeo was asked by Sen. Martin Heinrich of New Mexico if he would commit that to complying with the law and acknowledge that the CIA is out of the enhanced interrogation business.

"Yes, you have my full commitment," Pompeo said.

The congressman has in the past appeared to agree with Trump on the topic, the latter of whom said he would "absolutely" bring back waterboarding, as well as methods "a hell of a lot worse than waterboarding."

In response to the 2014 Senate report that found the CIA tortured suspected terrorists, Pompeo released a statement saying the methods used were constitutional.

"These men and women are not torturers, they are patriots. The programs being used were within the law, within the Constitution, and conducted with the full knowledge of Sen. Feinstein," he said. "If any individual did operate outside of the program's legal framework, I would expect them to be prosecuted to the full extent of the law."

Two of Trump's other nominees -- Jeff Sessions for attorney general and John Kelley for the Department of Homeland Security -- earlier in the week appeared to disagree with Trump on the issue.

And retired Gen. David Petraeus, also a former CIA director, told CNN's Christiane Amanpour that he thinks Trump has given up the notion that torture will be reintroduced under his administration.

Concerns about Trump's view of CIA

Sen. Mark Warner, the top Democrat on the Senate Select Committee on Intelligence, said in his opening statement that he's been "concerned" by rhetoric from Trump. Warner continued that the CIA "and the entire intelligence community has been repeatedly and unfairly subjected to criticisms of its integrity."

"These comments have affected the morale of these dedicated men and women," he said. "Today, I would like to hear your plan to reassure CIA employees that those countless hours they commit, and the operations where they may be called upon to put their life on the line, are not in vain, and that their sacrifices will not be disregarded in the White House, or anywhere else in the next administration."

Warner's opening statement was interrupted by a power outage at the hearing that put the session into temporary recess.

Trump agreed Wednesday for the first time with the intelligence community's assessment that Kremlin was behind the hacking.

"I think it was Russia," he said, after weeks of criticizing the intelligence community's findings, including a series of tweets this week accusing them of leaking allegations that tie Trump to Russia.

"Intelligence agencies should never have allowed this fake news to 'leak' into the public. One last shot at me. Are we living in Nazi Germany?" he tweeted Wednesday.

Asked in his first news conference after his election if he trusts intelligence agencies, Trump said they are "vital and very, very important" but didn't explicitly say he had faith in their information.

Instead, he pointed to his own nominees like Pompeo, and former Sen. Dan Coats for director of national intelligence, as forward-looking examples of how his administration will address the hacking scandal.

"Within 90 days, they're going to be coming back to me with a major report on hacking," Trump said. "I want them to cover this situation."

The officials said that the highest levels of the Russian government ordered the hacking of the Democratic National Committee and other state-level organizations in an attempt to sow doubt about the country's electoral process and to discredit Democratic presidential nominee Hillary Clinton.

Old domains of the Republican National Committee were also hacked, Comey said, but there was no evidence that the current RNC or the Trump campaign were successfully penetrated.

As CIA director, Pompeo will be involved with evaluating Iran's compliance with its agreement to curb its nuclear program. While he opposed the deal in Congress, he vowed to continue to keep up the CIA's monitoring of the situation, whatever the information gleaned indicates.

"Iranians are professionals at cheating," he said.

On social issues, Democratic Sen. Kamala Harris of California brought up Pompeo's opposition to same-sex marriage and asked if he would promise not to discriminate against LGBT employees of the CIA.

"You have my full commitment to that," he said.

Harris also brought up comments by John Brennan, the current CIA director, who said analysts have found climate change to be a deeper cause of "rising instability" in certain parts of the world.

Pompeo said he stands by his past skepticism of climate change but promised to relay any intelligence gathered that's related to the "changes in climatic activity."

Pompeo graduated first in his class from the US Military Academy at West Point and served in the US Army from 1986-1991. He was stationed in Germany for a time as a cavalry officer patrolling the Iron Curtain, according to his congressional bio.

He then graduated from Harvard Law School, where he was an editor at the Harvard Law Review. Returning to Kansas, he began a career in business, heading up companies that manufactured and provided materials for aircraft and oilfields.

In Congress, he has built a reputation as a conservative stalwart on national security issues. In particular, he was known as a hardliner on the Select Committee on Benghazi, a panel that he felt was not hard enough on Clinton for the actions of the State Department she then headed in responded to attacks that resulted in the death of four Americans.

He co-authored a lengthy addendum to the committee's findings in which he blasted Clinton for "a tragic failure of leadership" and accused the Obama administration of trying to cover up the true nature of the Benghazi attack.

When Trump publicly announced Pompeo as his choice, the congressman received some praise from Democrats, including Rep. Adam Schiff, the top Democrat on the House intelligence committee, who said Pompeo is "someone who is willing to listen and engage, both key qualities in a CIA director."