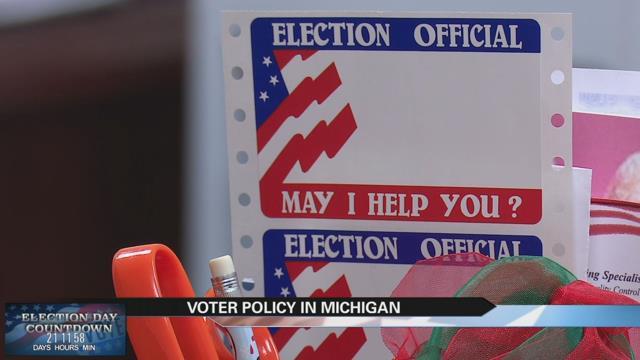 The Berrien and Cass county clerks want Michiana voters to know the election will not be rigged in southwest Michigan, despite what Donald Trump is saying.

“I don’t have any worry that it’s gonna be rigged,” Hillary Clinton supporter and Cassopolis resident Geraldine Norwood-Sims said.

“At this point, Donald Trump will say anything,” Sims said. “What he calls rigged today would be something else tomorrow.”

But for Sisk, her candidate’s claims of a rigged election are so real that she’s concerned her absentee ballot may not be counted.

“I actually was worried that maybe if I mailed it in, it wasn’t going to count,” Sisk said. “And I almost thought, ‘How do they know this?’ I was gonna call the clerk and say how do I know I’m gonna be counted? And then I was gonna email the Trump camp and let them know that I voted for them.”

But the Berrien and Cass county clerks said voters have nothing to worry about.

“That I’m aware of, we have never had one complaint of [voter] fraud in Cass County,” Cass County Clerk Monica Kennedy said.

“Basically our voter fraud has been on gathering petitions for recalls,” Berrien County Clerk Sharon Tyler said. “But we haven’t had [fraud] during the election.”

Both clerks said new voting tabulators allow ballots to be counted digitally without internet connection, meaning hacking into polls is not possible.

And both clerks said their teams work throughout the year to guarantee accurate voter lists, ensuring nobody has the chance to vote twice, vote if they’re dead, or vote if they’re not a citizen.

“We work very hard on the lists, on identification and making sure everything runs smooth,” Kennedy said. “And it is frustrating when we have no history [of fraud], there are no grounds, that someone can simply voice their concern and state, or cry, voter fraud when there is no history and no actual backup or reason to say so.”

But despite these guarantees from local clerks, some Trump supporters like Sisk are still worried.

“I do have concerns,” Sisk said. “Even if my vote was counted and there’s no problem in the district where I vote, there are people voting all over the U.S. for Donald Trump, and there are problems in other districts. And I realize that they’ve put things in place where they double check to make sure that nobody’s voting twice and they’re checking identification. But if you have somebody that’s not particularly a Trump supporter, who’s to say that they’re not going to override that.”

A representative from the Michigan Secretary of State’s office said the state is “not aware of widespread fraud.”

The rep added that, like isolated situations of voter fraud that have happened in Michigan in the past, if the state is made aware of potential allegations, it takes them “very seriously,” and if evidence is found of any wrongdoing, the state refers that evidence to a prosecutor.