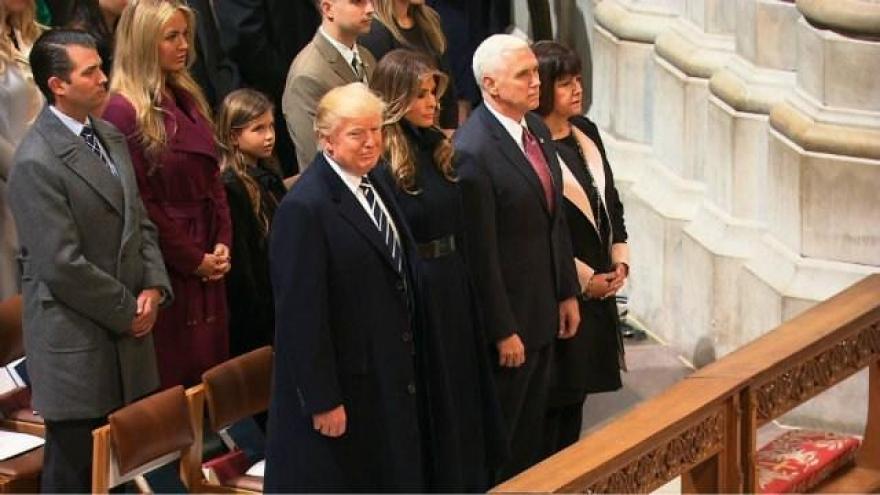 WASHINGTON (CNN) -- President Donald Trump made a peace offering to the CIA and sought divine blessing for his administration Saturday, but mass protests in multiple cities provided a graphic demonstration of the nation's huge political divides.

Trump traveled to the CIA headquarters in Langley, Virginia, for a briefing from senior agency leaders and spoke to several hundred people in the spy agency's foyer, in front of the wall of honor where fallen operatives are remembered with stars.

"This is my first stop officially, there is nobody that feels stronger about the intelligence community and the CIA than Donald Trump, there is nobody," Trump said. "I am so behind you and I know that maybe sometimes you haven't got the backing that you wanted."

But the President also made several departures and digressions from the issue of the CIA, complaining about the media's treatment of him, and accusing television stations of lying about the size of the crowd at his inauguration.

"I have a running war with the media, they are among the most dishonest human beings on Earth -- they sort of made it sound like I had a feud with the intelligence community. The reason you are the number one stop is exactly the opposite," he said.

At the same time, the gesture of the visit was an important moment for Trump, who raised doubts about his relationship with US intelligence agencies by initially casting doubt on their assessment that Russia intervened in the election by hacking Democratic email accounts. He had also spurred doubts about his willingness to accept traditional presidential daily briefings on the gravest security threats facing the United States.

Prayer service and calls for unity from clergy

Earlier, at Washington's National Cathedral, Trump listened as the prayer service unfolded, watching clergy from various faiths including Christianity, Judaism, Hinduism and Islam offer prayers for his administration and the nation.

In his opening prayer, the Very Reverend Randolph Marshall Hollerith, the Dean of Washington National Cathedral, appeared to be making a point about the need for unity after the bitter, divisive election campaign that made Trump president.

"Look with compassion on the whole human family; take away the arrogance and hatred which infect our hearts; break down the walls that separate us; unite us in bonds of love; and work through our struggle and confusion to accomplish your purposes on earth; that, in your good time, all nations and races may serve you in harmony around your heavenly throne through Jesus Christ our Lord," Hollerith said, reciting an excerpt from the Book of Common Prayer.

Trump, who was accused of discrimination against followers of Islam throughout the campaign, also sat quietly as a Muslim prayer echoed through the nave.

The imam, Imam Mohamed Magid, executive director of the All Dulles Area Muslim Society, had been expected to deliver the Islamic call to prayer, but instead recited two verses from the Quran that contained clear political messages for the new president and his administration.

The President did not speak, making the prayer service an unusual moment in a political journey shaped by his own brash comments, speeches and tweets.

As Trump became accustomed to the realities of power, those opposed to his presidency sent their own message, as a huge crowd gathered in Washington for a women's march and demonstrators gathered in massive numbers in cities including Chicago, Boston and Seattle. Protests also took place across the world, including in Sydney, Australia, London, Paris and Berlin.

The President's motorcade passed some of the protestors as he left the White House for the CIA. The protests were part of a grassroots organizing effort meant to demonstrate a show of force to the new administration that women's rights are human rights and to stress respect for racial, gender and political diversity that organizers say were threatened by Trump's campaign.

In Boston, Massachusetts Sen. Elizabeth Warren said that Trump's presidency should serve as a rallying point for progressives.

"Yesterday, Donald Trump was sworn in as President,. That sight is now burned into my eyes for ever and I hope the same is true for you," Warren told the crowd.

"We will not forget, we don't want to forget. We will use that vision to make sure we fight harder, we fight tougher and we fight more passionately than ever."

Before spending his first night in the White House, Trump moved quickly to consolidate his power and to make an immediate break with the Obama administration. He signed an executive order that will begin the process of chipping away at the Affordable Care Act, the centerpiece of former President Barack Obama's domestic legacy.

White House Chief of Staff Reince Priebus sent out a memo to all government agencies and departments calling for a freeze on new regulations.

Trump was still buzzing on Saturday morning after the day of ceremony on Friday, which included his inaugural address in which he staked out stark themes rooted in nationalism and populism, promising to put "America first" in its dealings with the rest of the world.

"A fantastic day and evening in Washington D.C.Thank you to @FoxNews and so many other news outlets for the GREAT reviews of the speech!" Trump said in the first tweet from his personal Twitter account of his presidency.

Hours earlier, he swept into several inaugural balls with First Lady Melania Trump, and the couple danced to Frank Sinatra's "My Way." The President told the crowd at one event that even people who had not been nice to him said "we did a really good job today. They hated to it but they did it. And I respect that. I respect that."

The impact of Trump's inaugural address was reverberating around the world on Saturday. Foreign newspapers narrowed in on the nationalistic turn in US foreign policy.

One of the world's most important leaders, German Chancellor Angela Merkel pledged to work with Trump to find "compromises and solutions" on the basis of mutual respect. Asked at a news conference about Trump's address and its America-first tone, she said: "I believe firmly that it is best for all of us if we work together based on rules, common values and joint action in the international economic system, in the international trade system, and make our contributions to the military alliances."

"And second, the trans-Atlantic relationship will not be less important in the coming years than it was in past years."

Trump raised eyebrows in an interview while he was still President-elect in which he said he had similar levels of respect for Merkel, and Russian President Vladimir Putin, who is widely regarded as a US enemy in Washington.

Some changes were already evident in the Oval Office Friday night. Red drapes had been replaced with yellow drapes. A bust of Winston Churchill had been returned after an eight year absence during the Obama administration. And the carpet was a new sunburst pattern.

CNN's Jeff Zeleny and Daniel Burke contributed to this story