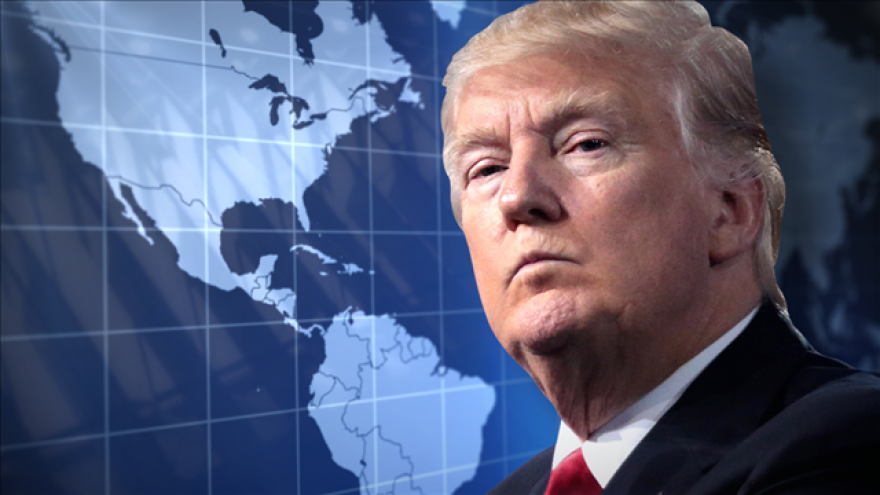 WASHINGTON (CNN) -- It was almost as if Donald Trump's outsider presidential campaign never happened Wednesday as he rushed to embrace establishment political and national security positions he once publicly abhorred.

Within a few hours of extraordinary political shape-shifting, Trump abandoned stances that were at the bedrock of his establishment-bashing campaign. NATO, he said, is "no longer obsolete." And he backed down a threat to brand China a currency manipulator.

Then, days after his administration had seemed to accept a ultra realist approach that would allow Syrian President Bashar al-Assad to remain in control of his shattered nation, Trump decried him as a "butcher" over chemical weapons attacks on civilians -- fueling speculation he now advocates regime change.

That position, sure to antagonize Russia, came as the President adopted the most skeptical view he has yet displayed on the possibility of improving relations with the Kremlin, a position he once advanced as a candidate and that flew in the face of geopolitical realities and universal elite opinion in Washington.

"Right now we are not getting along with Russia at all. We may be at an all-time low in terms of relationship with Russia," Trump said at a White House news conference, in stark tones at odds with his former vows to ease the new chill in ties with the US nuclear foe.

By contrast, Trump was full of praise for Xi Jinping -- whom he met in Florida last week, saying that he believed the Chinese president was sincere in helping defuse the US showdown with nuclear North Korea.

Trump made castigating China a staple of his presidential campaign, saying the communist giant was guilty of "rape" against the US economy and promising it would be branded a currency manipulator on his first day in the Oval Office.

In another reversal, Trump praised Federal Reserve Chairwoman Janet Yellen, whom he had previously pledged to replace when her term expires, and once accused of holding interest rates low as a political boost for former President Barack Obama.

It was not clear whether Trump's sudden policy flips were the product of a new outlook and worldview. But previous presidents have often remarked that the world looks a lot different from the Oval Office than from a campaign rally.

It may not be a coincidence that Trump's adoption of conventional political positions came the day after a stunning interview with the New York Post in which he publicly criticized his political guru Stephen Bannon, his insurgent, populist political conscience.

Bannon was last week dumped from the National Security Council in a move that was seen as a triumph for officials who represent a more traditional, globalist foreign policy worldview.

His demotion was seen as another sign that the more moderate, establishment orientated influences in his administration --- epitomized by his son-in-law Jared Kushner, Trump's daughter Ivanka, and chief economic adviser Gary Cohn -- were rising to the detriment of Bannon and his anti-establishment cohort Stephen Miller.

Of course, one day of policy adjustments does not necessarily mean that Trump's unique political persona and methodology are suddenly going to change. After all, the President has spent most of his first 100 days in office torching conventional political practice --- often trading in untruths and exaggerations and pouring oil on political controversies on Twitter, including accusations that his campaign had links to the Kremlin, at a time when Moscow was being accused of interfering in the US election.

There is no sign, for instance, that Trump is pulling back from other controversial positions -- including doubling down on border enforcement and expulsions of undocumented immigrants.