Trying to make the grade 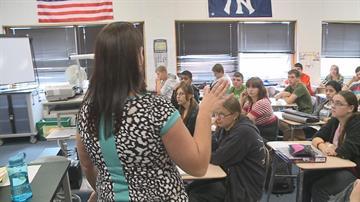 BENTON HARBOR, Mich. -- "It was disappointment, but it was reality too," says Lacey James, the School Leader at Dream Academy Charter School in Benton Harbor.

James has a task ahead of him. Dream Academy opened just four years ago and is already on the State of Michigan's list of persistently lowest achieving schools.

Most schools are forced to enter a redesign plan but because Dream Academy is so new they were able to opt out. James says they still have a plan for success. "We're watching them," he says. "We're using our data to assess to where they're at. The big thing is with attendance, making sure they're here."

Dream has an attendance problem. Tuesday, the first day of school, only 70% of students showed up. "We need them here," says James. "You can have a wonderful product but if they're not here to receive it, then you're going to be right back where you started."

It's a different story in Buchanan. Buchanan High School was on the list in June of 2010 and got off the list in August of 2010. Rachel Carlson is an 11th grade teacher at the school. She remembers being frustrated with test scores. "We thought we were putting forth a lot of effort, but our students weren't really putting that effort out on the test," she says.

Now, Buchanan High School has the highest top-to-bottom ranking in Berrien County."We started focusing on things the kids could do to help practice those tests," says Carlson.

Buchanan had a bit of a head start. The state list of underachieving schools came out in 2010, the year the High School was on it. Buchanan was already working toward a fix. School officials had identified a problem three years ahead of time and had longer to implement new policies.